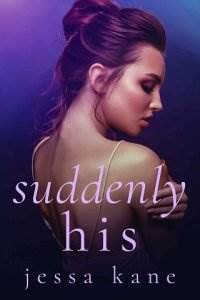 This is what I get for trying to hang out with the cool girls.

From the backseat of Gina’s musty Hyundai, I watch the scenery fly by outside. It’s nighttime, the moon is like a giant wheel of cheese in the sky, wispy clouds threading past it. Tree branches dance in the chilly fall wind. Cold wind travels in through the front passenger side window now as Darlene rolls it down, howling along with the loud music that blares from the car speakers, confident there’s no one to hear us all the way out here.

We’re a long way from the poor side of the county in which we live. But we’ve gone through the rich side and straight through to the insanely wealthy section. The big, clustered together houses are in our rearview now and we’re entering an area where the mansions are more secluded, acres of land surrounding each one. I’ve only been out this far once, because my mother is the full-time cleaner at one of them.

In the daytime, the winding tree-lined roads were majestic, lush. In the nighttime, they seem more ominous. Secretive. Reaching up so high, the stars barely peek through.

Resting a hand on the passenger seat in front of me, I lean forward, sticking my head in between Gina and Darlene. “Wh-who did you say was throwing this party?”

They look at each other and burst into laughter. “All you need to know is there will be free booze and a good time. Relax, Maisy.”

I force a smile. “I’m relaxed.” Liar. “I’m just surprised you guys know anyone out this far. People from this neighborhood don’t come to our part of town.”

“That’s because we come to them,” Gina drawls, her eyes meeting mine briefly in the rearview mirror. “And they sure do like their conveniences.”

Confusion wrinkles my brow, but I don’t have the chance to question Gina’s meaning. Because we’re pulling off the main road and stopping in front of a large, ornate security gate. Gina rolls down the driver’s window and keys in a passcode with a few taps of her long, electric-blue fingernails and it trundles open, revealing a driveway of which I can’t even see the end.

My heart starts to rattle around in my chest.

Most Saturday nights, I can be found cleaning the local elementary school and various offices. Following in my mother’s footsteps as a cleaning person isn’t exactly what I planned for my future, but it’s a respectable job and it allows me to listen to audiobooks I check out from the library as I work. So I might be scrubbing floors in reality, but in my imagination, I’m stowed away on a pirate ship or kissing a duke in Regency England.

The schools were closed this week for Thanksgiving break, though. Most of the offices haven’t been occupied, either, so I had the night off. I’ve known Gina and Darlene since I was a kid. We grew up on the same block, but I’ve always been a loner, while they’ve been thick as thieves. Every single Saturday night, they pile into Gina’s Hyundai in glittery dresses, high heels and beautifully applied makeup. I’ve always envied their sense of adventure, but was never daring enough to accept their repeated invitations to join them.

I’m starting to regret my moment of weakness when the house comes into view. And then alarm bells begin clanging wildly in the back of my mind. Because it is not just a house. It’s an estate. A mega mansion. There are four—four!—fountains lining the circular driveway, hedges trimmed to perfection, even the air smells better floating in through the car window. Like pine and cider. The mansion reminds of the White House itself, but with more embellishments. More expressions of wealth, such as the gold-plated double doors, the roses and ivy clinging to the sides, a chandelier over the entrance.

Maybe I should be delighted that I get to see a house like this on the inside. It’s a far cry from the small two-bedroom apartment I share with my mother right beside the train tracks.

But I’m not delighted.

My mother might be a complicated woman, our relationship might not be perfect, but she knows the world. And ever since I was a baby, she’s told me, “Maisy, life isn’t a fairy tale. Rich men only want bad, bad things from poor girls. It’s easier for them to get it because they hold all the power.”

“Whose house is this?” I ask, my fingers curling into the seat.

Gina brakes slowly and parks the car behind a sleek silver Rolls Royce. One of many.

“All right, I guess it’s time we come clean,” Gina says, shutting off the ignition.

Darlene turns in the passenger seat to face me in back. “This house belongs to Winston Creed.” I don’t recognize the name and my puzzled expression lets them know it. “Oh, Maisy. You really do need to get out more. He’s one of the richest men in the state.”