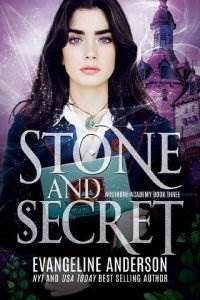 Bran O’Connor was hard to look at.

I don’t just mean he was ugly, although if I was being honest, he really was. He had lank brownish hair, small no-color eyes, and really just terrible skin. Like pizza-face bad is what I mean. He was also shorter than me, thin verging on scrawny, and one of the nicest people you could ever hope to meet.

Ha—surprised you there, didn’t I? You thought I was just going to go on and on about how awful he looked but I really don’t need to—the popular kids at Nocturne Academy did that plenty. He didn't need me piling it on too.

He really was a nice guy, though and there was something about him, something I couldn't quite put my finger on…

But I didn't know that on the first day of our new unit in AP Biology. I just stood there at the front of the room, trying not to let my face sag into an expression of disappointment when Mr. Barron called out,

Reluctantly, I went to sit beside my new partner. This was my fault—if I hadn’t been late on the first day of this new unit, I might have gotten paired with someone else— someone like Elian Darkwing.

Yeah, I know his name sounds like something straight out of a vampire romance novel but that's because he is a vampire—or Nocturne, as they call themselves. He's tall and gorgeous and completely unobtainable but hey, a girl can dream right? After all, one of my best friends, Megan, is Blood-Bonded to a Nocturne so maybe it could happen for me too.

Well, not this time, apparently because now I was stuck with Bran O'Connor which was going to be a problem.

I don’t mean it was a problem because he was hard to look at. No, the problem was going to be the extra attention having the ugliest guy in school as my lab partner was going to draw from the beautiful people at Nocturne Academy.

How do I look, you’re probably wondering? Well, look up the word “nondescript” in the dictionary and you’d see a picture of me. And then you’d promptly forget what I looked like because I am that forgettable. Seriously—dishwater brownish-blonde hair, muddy, no-color hazel-ish eyes, no figure to speak of—that’s me. Plain Jane and completely boring.

Everyone else at Nocturne Academy has something special about them. They’re cool, mysterious vampires, or witches with amazing magical powers. Or they can turn into freaking dragons and fly and breathe fire—which recently happened to another good friend of mine, Kaitlyn. Or they’re pretty, sparkly fairies from the Realm of the Fae just slumming it here in the human world until it’s time to make their debut at the Seelie Court.

But me? I’m nothing. I’m meh. I’m so bland I make dry toast look exciting.

Which is why I’m usually able to fly under the radar of the pretty people—in this case, Morganna Starchild.

Morganna was a Fae with perfectly coiffed honey-blonde hair and huge blue eyes that sparkled like sapphires in her exquisitely sculpted face. Like all Faes, she looked a little like an Anime character come to life with eyes and boobs that were gorgeous and just a little too big and cheekbones that would make any plastic surgeon retire on the spot. She was just basically perfection.

And lately she’d really had it out for me.

I don’t know why Morganna started picking on me. Maybe because I’m not as pretty as her. But then again, to the Fae, all humans look like toads. I mean, we’re just so much less perfect than they are, we might as well be one step down on the evolutionary ladder.

For whatever reason, Morganna had made it her personal mission to make my life miserable lately. And having Bran as a lab partner wasn’t going to help her decide to ignore me and get back to her regular life of being flawless and pretty.

Speaking of Morganna, she was currently sitting beside my crush, Elian Darkwing and smirking at me as I settled in my chair beside Bran. She was flirting shamelessly with Elian, which was supposed to be against the rules. For time out of mind The Edict—this really strong magic spell—kept the different kinds of Others from dating or having romantic relationships outside their own species. But since my friend Megan and her Nocturne boyfriend Griffin broke the spell, it seemed like all bets were off.

I tried not to notice the way she was whispering to Elian as she watched me, but I couldn’t help hearing what she was saying.

“Looks like poor little Emma finally found a boyfriend. And he’s almost as pretty as she is!” she said, in a voice low enough that Mr. Barron couldn’t hear it but loud enough that the pretty people in the room—mostly other Faes with a few Nocturnes thrown in—who were grouped around her like a court around a queen, could.