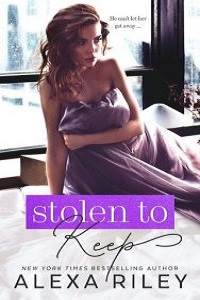 I peek over my shoulder as I grip my backpack tighter. It’s so full of books it weighs almost as much as I do, but I forget about it because I swear someone is watching me. It’s a weird feeling that has the hair on my arms standing up. It's happened more than once and the knot in my stomach grows bigger with worry. I should’ve left the library before it got dark but I lost track of time. I’m not sure how that’s possible when I swear I’ve been counting the seconds since I last heard from my sister.

I pick up the pace since I’m not far from my small flat. I had to get out for the day and the library is the only place I could think to go that’s cheap and I can focus. Too bad I didn’t get any studying done because my mind kept going back to my sister. Maybe no one is actually following me and I’m going crazy because I can’t get in contact with her. My mind keeps telling me she’s been kidnapped or something, which is nuts.

I really need to stop listening to those true crime podcasts. I’ve convinced myself some psycho killer has her and there’s absolutely nothing I can do but obsess over her not answering my texts or phone calls or emails. But the thing is, this isn’t like her. We’re always in contact, except when I’m in super-study mode and even then when I reach out to her she always picks up. Last I heard from her, she was going to an interview. I called a million times and finally got out of the company that she did show up to the interview but they couldn’t give me any more information. Since then I can’t find anyone else who’s seen her. I’m still waiting to hear back from her landlord and I’m hoping he can give me something because the police have been no help. I couldn’t even get them to do a safety check for me. They said if I wanted to file a missing persons report I needed to come into the station and do it. That’s not so easy because I’m a whole continent away. It’s not like I can hop on the next flight out of London. I can’t pull thousands of dollars out of my ass, but I’m getting worried.

I grab my keys out of my pocket and move quickly as the feeling of someone following me lurks. Just as I do, I run into a body and almost knock my keys out of my hand. I mumble an apology as I dart into my building and bypass the elevator. I take the stairs quickly to my floor, then open my door as fast as I can and lock it behind me. I drop my bag and keys and then lean up against the door to catch my breath, feeling momentarily safe. My eyes close as I try and pull it together. My shoulder hurts from whoever I ran into and I feel guilty for not watching where I was going. I have too much other crap to worry about so I’m sure he’s fine. I don’t think he even noticed or moved when I bounced off him and kept going without bothering to look up.

“You’re not going to cry,” I tell myself, because I don’t ever cry. I might be the younger one between Collins and me, but I tend to have a stronger backbone. I can keep it together better. We were born less than a year apart so people call us Irish twins. We’ve always been close and that bond only grew when we lost our parents.

This separation has been tough though. We both kept saying that my going off to college in London was a no-brainer decision. I was offered a full ride and given grants that helped pay for my tiny flat. I thought it was the correct decision, but it was hard leaving Collins, and even now being so close to the finish line I’m questioning if I made the right choice. I can’t find my sister, and if I’d been back home I’d know where she was.