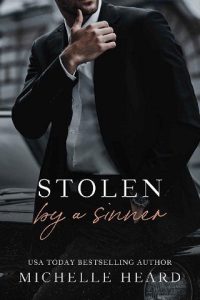 The Hunter – The Rigs

Wake Me Up – Tommee Profitt, Fleurie

“Be kind, have courage, and always believe in a little magic.”

Aunt on mother’s side: Ayesenur Altan

Cinderella said, ‘Be kind, have courage, and always believe in a little magic.’

I suppress the bitter chuckle while walking down the corridor.

A gunshot rings through the air, the sound rippling over my skin. I startle but catch myself in time so I don’t drop the tray of black tea. With my heart lurching in my chest, I pause outside the door, and closing my eyes, I suck in a deep breath of air.

She’s very wrong. To survive in my world, you have to be dead inside, on guard at all times, and never dream of the impossible.

Never dream of anything.

I open my eyes, raise my chin, and step into the sitting room. For a split second, I glance at the dead body. Blood stains the carpet. Again.

The guy didn’t even work here for two weeks. Pity he didn’t last longer. At this rate, Tymon will run out of people to kill.

Which means it’s only a matter of time before I meet the bullet with my name carved into it.

I’ve seen it plenty of times whenever Tymon felt the need to threaten me. He keeps a wooden box full of bullets with all the staff's names engraved on them next to his favorite armchair.

Lord only knows how I’ve survived this long.

Tymon brought my mother over from Poland after I was born. She died when I was twelve, and ever since, I’ve been working for Tymon as a maid. Mom used to quote Cinderella to me, but after she passed away, I quickly realized life wasn’t a fairytale.

Tymon Mazur is the head of the Polish mafia. He believes you can beat and threaten your staff into obedience. He’s right. No one in this mansion will dare go against him.

You don’t just wake up one day and decide you’re no longer going to work for him. The only way out is death, and no matter how bad things get, I’m not ready to die.

“Get rid of the piece of shit,” Tymon barks at the remaining three men.

They pick up the body and carry it out of the room as I set the tray down on a glass coffee table.

Tymon’s black gaze rests on me, empty and cruel. “I want prawns and oysters for dinner.”

I nod dutifully. “Yes, Sir.” Not wanting to spend a second longer than I need to in his presence, I hurry out of the room.

“Did I say you can leave!” he shouts after me.

My feet come to a faltering stop, my shoulders slump, and even though every muscle in my body screams at me to not turn back, I obey.

It’s either that or death.

Stepping back into the sitting room, I keep my eyes cast down, staring at the black fabric of the skirt that ends just under my knees.

When I hear the armchair creak beneath his weight, I peek up. Tymon’s gaze is narrowed on me. He sets his gun down on the glass table, then closes the distance between us.

Power radiates from his bulky frame, the loss of half his hair doing nothing to lessen how dangerous and cruel he looks. He has round cheeks and a mustache that curls up at the ends.

His meaty palm connects with my left ear, the familiar pain exploding over my jaw and neck. The force has me falling to the right, my hip slamming into the golden corner of the coffee table, my hand crashing into the tray. The hot tea stings my skin before instantly cooling.

Staring at the carpet, I breathe through the sharp pain in my right hip.

That’s going to leave another bruise.

I take a breath, my chest empty of emotions.

“You only leave when I give you permission,” Tymon orders, his tone not leaving any room for arguments. Not that I’d dare argue with him. I’m not that stupid.

“Yes, sir,” I murmur, still not moving from my spot on the carpet.

“The food better be here at six,” he demands.

Shit. That only gives me two hours.

“Leave!” he barks. It’s followed by him grumbling, “Piece of ugly fucking shit.”