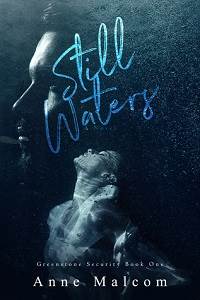 
“Water, water everywhere and not a drop to drink,” I murmured, tracing my blood-red fingernail around the rim of my martini glass.

A throaty laugh carried over the melody of “Motorcycle Man” by Saxon, a song only thrashed by true lovers of the genre.

Bikers. Of course. The original rockers. Rebels without a cause. The one percent that the AMA said didn’t stay inside those carefully drawn lines that governed society.

Outlaws, in other words.

Despite the fact that if there was any case of spontaneous orgasm, it would be from a smoldering look courtesy of the many, many bad boy hotties currently shooting the shit and dripping male beauty all over the place.

Most rules were made to be broken here. I’d broken a lot myself. Almost all of them, actually. Just not that one I’d set for myself. One that became necessary for treading water in this world when I started flailing nine years ago. Or, if we wanted to get really specific, two decades ago.

“Babe, you could drink,” Rosie told me, her mouth closing around a beer and taking a sip before she raised her perfectly groomed eyebrows at me.

She gestured across the party with her beer, the movement fueled with drunken excitement so white foam bubbled from the top and trickled down the neck of the glass.

“You could drown,” she corrected, waving the bottle at the sea of leather, not noticing the fact that she was watering the yellowing lawn with her beer.

I gazed at the very sea we were in the midst of. The one I was more than used to. Not that you were exactly immune to it. No matter how long I’d been involved with the Sons of Templar—which was since Rosie and I became best friends in kindergarten when we both posed a daring escape after becoming bored of finger painting—I wouldn’t get used to the fact that an unsightly percentage of their membership looked like GQ had lost a gaggle of models when they decided to do an “Outlaw Chic” shoot.

Though, these men were better than GQ. They weren’t groomed or sculpted or one-dimensional. They were real. Three-dimensional men who weren’t perfect by society’s standards because they didn’t live in a society where men paid three hundred dollars for haircuts and looked in the mirror more than I did.

No. They lived in a world where their chiseled and droolworthy muscled and tatted physiques weren’t to sell magazines. They were to stay alive.

And shit, did they endure well.

“No,” I murmured, my gaze finding Jagger, from the New Mexico chapter. His emerald eyes fastened on me and glowed with a look that I’m sure melted many a panty. Mine even felt deceptively hot. Even with the scar marring half of his face, he was something. Shit, the scar made him.

And the eyes. The ones that held the demons every woman wanted to conquer but few would be brave enough, special enough, to touch. Most likely only one or two would be capable of at least taming them.

But I had my rules. And amidst the lifestyle where rules were frowned upon, broken and stepped on by heavy motorcycle boots, they were important. Pivotal.

Control over those and myself was necessary for my continued sanity. And survival. Just like these men needed to endure, I did too.

I just did it with heels and an icy façade instead of a cut and a gun.

So, no horizontal tango with the bikers who I considered my family. It could, and almost certainly would, end badly. And then I’d have to either face the awkwardness of wading through the destruction of a relationship or cut out my family completely.

But they were careful slips, even a teenage me, inebriated on beer and testosterone, had been thinking.

Ones I had seen less than a handful of times since then.

Ones who didn’t pose a danger, because they didn’t take anything from me that couldn’t be given back.

I might not be able to take back my virginity, but I still had the box it came in, and that was fine with me. I read that on a T-shirt somewhere, so not an original thought, but apt.

“I won’t drown,” I continued after I’d waded out of my mind. “Not when I’ve mastered the art of swimming.” I gestured with my glass, not spilling my precious martini because I’d only just arrived, and Rosie had been here since—I glanced at the table—at least four beers ago.

She could handle more than that.

Despite her appearance—chocolate brown curls, delicate makeup and light pink, skintight dress with matching wedges—she was not innocent. Being the sister of the president of a motorcycle club, not to mention the daughter of the previous president, meant that innocence was something she wasn’t even born with.