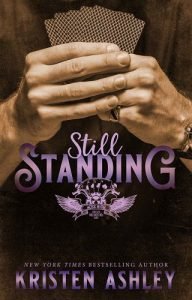 I pulled into the back lot next to the huge warehouse beside the super-hip home improvement store, Ace in the Hole, and as instructed, kept driving around the back of the warehouse to get to the long, squat building next to it.

I did this practicing deep breathing.

I’d done my research at the library the day before and I’d lived in Phoenix all my life.

I’d heard about Ace in the Hole, but I’d never been there.

That was, he did that before he was incarcerated.

There was a large area between the warehouse and the building next to it.

The back doors of the vans had a decal of a playing card—the ace of spades, with the curves of the symbol being the eyes of a skull, flames coming out the top, black rivulets (meant to denote blood? eek!) dripping from the bottom, spatter around it (again, blood?)—and next to it, it said Ace in the Hole Contracting.

That area between buildings also held a variety of Harleys parked in a line. This in front of the long, squat structure. Under the overhang that ran the front of that space were three (three!) barrel grills. Two picnic tables. A scattering of mismatched outdoor chairs with equally mismatched tables, almost all of which had empty beer bottles or cans or overflowing ashtrays or all three on top. And I could see there was a misting system built into the overhang to cool it down during hot Phoenix days, of which, that day was one, it was just that the mist wasn’t on right then.

Where I was heading because I was stupid.

“You’ve done this before, Clara, you’ve done it twice,” I told myself under my breath as I parked outside the building, next to the bikes. “You did it and you walked away. You’re fine. You’ll be fine. You’ll say what you have to say and then go. They’re not going to kill the messenger. Right?”

I said these words to convince myself I was going to be perfectly okay.

And, truth be told, this was actually one of the less dangerous messages Esposito had sent me out to deliver.

The Aces High Motorcycle Club owned this long stretch of property on which they had a large home improvement store, a larger warehouse, and this building.

I’d heard others who did not grow up there say they’d lived their whole lives going into places of business and not seeing a No Firearms Allowed sign on the door.

To me, that was shocking.

During my research at the library the day before, I’d pulled up a variety of stuff that included a couple of articles about the opening of a home improvement store run by a gang of bikers and how that was instantly popular.

How Aces High MC were “changing the face of the MC culture” by running two successful businesses (the store and the contracting) as a club.

How people, especially Phoenicians, found it cool to turn away from a chain store like Lowe’s or Home Depot and “shop local,” when that local shop was owned by bikers.

I’d also seen pictures of the members of the club, all rough-looking guys. But they were bikers, they were bound to look rough. It wasn’t like they were the kind to gussy up to have their picture taken for an article in a newspaper.

Or maybe they did gussy up and in real life, they were really rough.

But whatever they did behind the scenes, they had a very visible face. A woman couldn’t drive in broad daylight to their hangout and then disappear.

Unfortunately, no one but Esposito and Tia knew I was there.

If something happened to me, I doubted Esposito would care.

Tia would, but she wasn’t in a place to do anything about it.

This part was bad.

And try as I might, I couldn’t find good.

But I hadn’t had much good in a long time (say, since the moment I was born), so at least I was used to it.

I switched off the ignition, grabbed my purse and slung it over my shoulder. Then I exited my car hoping that the repo man wasn’t following me.