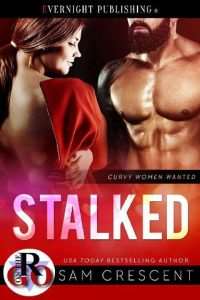 No one else in town knew just how precious Emily Miller was. James Stork watched her from where he sat in his office. She was the only person he allowed to work in his bar, but he hated seeing her do any kind of work. She was young, only twenty years old, sweet, and precious.

He’d watched her flourish for the past couple of years now. He’d known from the moment he looked at her she would belong to him, but there had been a pain within her that he couldn’t fix right away. Her parents were killed in a random drive-by shooting. She’d been hit but survived, and now, she lived by herself, struggling through. Only, she didn’t struggle. He made sure her apartment was taken care of, along with any outstanding debts.

Her car, which had seen better days, had needed a whole new radiator and pipes, and he’d taken care of the bill. Everyone in town knew to keep away from Emily.

He’d marked her as his, and well, he was getting tired of sitting around watching her be sad. There was no room in her life for her to ever be sad about anything, and seeing her now, like this, it tore him up.

Getting to his feet, he watched, wondering if she had any idea of the manipulation he’d used to keep her in his world. It hadn’t been easy. None of it had been fun either. Fighting to keep her in his life was one of the hardest things. When she’d wanted to leave town, he’d been there to stop her, to convince her to stay.

He folded his arms across his chest, and she looked up, giving him a smile.

“You weren’t kidding about a party,” she said. “I think whoever was here made it their mission to stick gum everywhere.”

There was a party, and the next time, he’d make sure no gum was allowed on his premises. He would have invited Emily, but he knew she wasn’t the kind for large crowds. After being bullied through high school, she kept to herself mostly. He still didn’t have all the details on those bullies, but they better give him a wide berth.

He had a reputation in town, and it wasn’t a good one. Not when it came to protecting his woman. He would hurt anyone who thought to look at her the wrong way.

No one messed with him. It was why Stork’s Bar and Grill was one of the most popular places across three states. He had a whole lot of visitors, even from a couple of very high-powered MCs, and he had no problem doing business with them. Whenever two of them entered his bar, they knew the drill: no fighting. If they started to fight, he got involved, and it never ended well.

For the most part, he kept on the right side of the law, but when it came to his woman, well, he’d been … naughty.

A stalker or a guardian angel, depending on who he spoke to. He kept an eye on her at all times, took care of her when she needed it, and intervened when a guy or out-of-towner thought they could have a shot with his woman. Everyone knew he’d declared himself as Emily’s man, apart from the woman herself.

“One day you should come. It would be a lot of fun.”

She burst out laughing, and damn, he loved to see her smile. The sound was sweet magic, and he couldn’t get enough of her. “Me at a party? Nah, it wouldn’t be fun. I’m not designed to like parties.”

“I don’t think anyone’s actually designed to like anything. You could be doing me a favor though.”

She pushed a strand of her red hair out of the way. He hated when she pulled her red locks into a ponytail. He liked it when she left her hair cascading all around her. The only way he’d accept her hair bound up was wrapped around his fist as he fucked her hard and fast from behind. She’d be glorious to fuck. She was a virgin, and even though he didn’t want to hurt her, he would do it, to be the first and only man between her sweet thighs.

“How would I be doing you a favor?” she asked. “Do you need help behind the bar?”

“No, not behind the bar. You know you’re not old enough.” He stepped up close to her, taking the mop from her tight grip and leaning it against the table. “I’d need help with this.” He took her hand, leading her out onto the dance floor.

He pulled her in close. “Dancing.”

“You don’t know how to dance?”

“I know how to dance.” He put his hands on her generous hips. His woman wasn’t slim, but curvy in all the right places. Nice big tits, wide hips, rounded stomach, and a juicy set of thighs on her that he dreamed about being wrapped around him constantly. “Do you?”