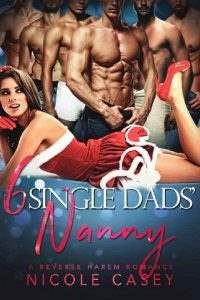 I tried to keep my composure as I drove down the road in one of the nicer neighborhoods in Southlake, Texas. I caught a glimpse of the house that was my intended destination and let out a hollow whistle. It was gorgeous. It wasn’t a mansion by any stretch of the imagination, but from the white, picket fence that sat in front of it, the pristine white paint that covered the molding on the outside, and the manicured lawn, it still had a bit of money behind it.

I pulled up to park in front of it and took a deep breath. It was about a quarter til 10 o’clock in the morning, and I was due for a job interview in 10 minutes. I was a recent graduate with my degree in child psychology and early childhood development, and needed to get some experience working with kids under my belt. I posted my credentials and desires to a job-board and was called shortly thereafter by a man named Ethan Coleman, a single father who needed a nanny.

Fall was just settling in and I was excited to finally put my new skills to good use. I flipped down the viser and popped the cover off the mirror to check, for the fifteenth time that morning, that I looked okay. I had my dark-blond hair pulled back into a high-fashion ponytail, which really allowed my shimmering, blue-green eyes to be the crown jewel of my pale face. I had on a cyan colored blouse, and a black pencil-skirt, with a pair of my favorite black pumps. Yes, I was aware of the fact that I was interviewing to watch children, but I was also aware of the certain advantages my 36C bust and wide-waist gave me when it came to asking people for things that I wanted. I was the girl who always got comped drinks at the bar, and discounts on food at festivals. It used to annoy me, but now I know how to whisk it out when needed.

Confident I looked the part, I stepped out of the car and made my way towards the front door. The closer I got to the house, the larger it seemed to get. It was designed to not disturb the cookie-cutter image of the suburban neighborhood it resided in, but it definitely boasted a larger square footage. It was probably two-stories from the outside, and looked like something fresh out of a Homes and Garden magazine.

I rang the doorbell, and gave my outfit one final smoothing down, just in time for the door to open, and it may as well have smacked me in the face for what appeared on the other side. Tall, with tanned skin, dark, wolf-like eyes, medium-length, swept back hair, and even a goatee; a god stood before me.

He stuck out an arm, and I could see, even under his button up, it was decorated with tattoos. His broad shoulders filled his frame out well and he smiled at me in a way that made me want to strip down in an instant. He was gorgeous. Never before had I considered calling a man ‘Daddy,’ but if it was going to be anyone, it’d be someone like him.

I took his arm and shook it, swallowing deeply as I did so. “Y-yes. Jordan Kent.”

Ethan chuckled. “It’s lovely to meet you. Come on in.”

Entering the house, it was even more clear that it was larger on the inside than it appeared on the outside. I was greeted by a huge foyer, with a gorgeous chandelier hanging from the ceiling, and a marvelous curving staircase leading to the second floor. Despite the home’s upper-class feel, Ethan kicked aside a ball as he entered, and I took immediate note of the photos of two adorable blond-haired boys hanging on all the walls and one of the pair of them and Ethan in front of a Christmas tree. The holidays weren’t too far away, and it was good to see that Ethan was a dad that cared for his kids.

He grabbed the frame and handed it to me. “These are my boys, Davin and David.” Seeing the photo up close, it was clear the boys were twins. They had dark eyes just liked their father, but didn’t bear much resemblance to him otherwise. They must take after their mother. “You’ll learn the difference between them soon enough. Davin is more adventurous than David, but they’re both athletic, sweet boys. I’m sure you’ll love them.” And a doting father to boot; Ethan was the complete package. “Follow me.”

I set the photo back down in its place and followed Ethan as he led me up the staircase. We passed a pair of bedrooms that clearly belonged to the boys, and then turned into an office. It was decadent and clearly a place Ethan spent a lot of his time. It had papers all over the place, though they were well stacked and organized, and had huge, mahogany bookshelves that were filled with thick and thin books, and even more pictures of his kids. Even sweeter, were the bright colored children’s books that were lined in alongside the thick, academic tomes. Ethan’s kids were never far from his reach.