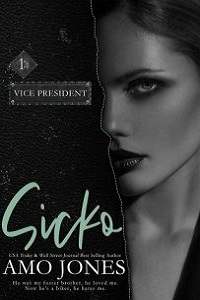 
As most of you know, I don’t usually have trigger warnings in my books. My main genre is dark romance, so I’ve come to expect my readers to just know that they’re getting something dark and twisted once they flip the first page of an Amo Jones book.

This book is different. This is “my level” of Dark Romance. It is dark. It will have you squirm in some places, but not in the way you’re probably used to or expect.

There are scenes within these pages that will be uncomfortable for you to read. I didn’t water anything down. I wrote these characters as authentically as possible, because you, the reader, deserve that. I didn’t sugar coat something to make it easier to digest, I drowned every scene in tequila, and just like a shot of Patron, it needs to be swallowed before you feel its affects.

Please don’t take this warning lightly. These characters are like nothing I have written before, and this story is not one I’ve ever experienced.

This book is DARK, but every single word and scene that is in here is there for a reason. I’m not here for shock value. This is just a story that needed to be told in the art it has been displayed in.

Because the bitch really came out to play with this one.

So I usually go ham on this section. Anyone would think I’d just won an Oscar, but girl, I’m tired.

This book sucked the soul out of me.

So, I just want to say thank you. To you, who is reading this book. Thank you for taking a chance on my world and allowing me to meddle with your mind for eight hours.

I’ll buy you a drink when I meet you.

There was a woman.

She stood maybe a whole foot shorter than my six-three. I wanted to study her at close range to understand why she fascinated me so much, but the rustling of leaves that were falling around my feet distracted me enough to forget to ask questions. I was too busy thinking about the circumstances that led me to this point in my life.

Rock fucking bottom with no foundation to rebuild on.

I squeezed the gas hose tight. Who the fuck was this woman? An oversized hoodie hung off her fragile figure carelessly, her long dark hair flowing over her shoulders in tasteful waves. I couldn’t get a good look at her face. She clearly did everything she could to hide it. Figured she wanted something since she hasn’t moved from where she’s staring, her body perceptibly turned toward me.

I nodded my head at her politely when I figured she wasn’t going to stop gawking. I was fucking paranoid too. After what just happened and what we endured, I needed to get the fuck out of here fast.

I watched as her face peeked up behind the rim of her hoodie and her big green eyes zoned in on me. She glanced into the back of my car before coming back to me. “You on the run, handsome?” Her voice was husky, as if she had smoked cigarettes her whole life. There was nothing suspicious about her at all, aside from the hoodie.

For a second, and I mean a very brief fucking second, darkness momentarily flashed over her eyes. Almost like a cloud that shaded over the sun on a clear summer day. As quick as it was there, it was gone.

The corners of her mouth tilted up in a smile. “Well, there’s a place on the outskirts of downtown LA. The bar is called Patches.” She assessed me. “No promises that they’d let a pretty boy like you stay, but you could always try.”

I stood there with the gas pump beeping in the background, my mouth slightly open. I went into the store to pay for my gas and before I could thank her, she was already gone.

I wish I could remember the day I was welcomed into the Kane family, but I was barely old enough to create vivid visions inside of my head. I was days old, dumped and left on the front doorstep of the local orphanage in a seedy area of San Francisco. I don’t know much about what happened, not because the Kanes didn’t want me to know, but because I’ve never wanted to ask. Being discarded as a baby by my parents is all I need to know. I was lucky that Mr. and Mrs. Kane were there the next day, wanting to find their brat of a son, a little brother that he could play with.

He got a sister instead.

Royce was three when I came home, and boy… was he not impressed about getting a sister instead of a brother.