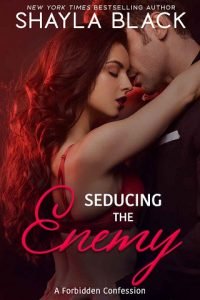 What did you expect? You’re the enemy.

I am, and she’s too smart not to realize I’m springing a trap. She also knows I’m powerful enough to destroy her and all she holds dear.

But I’d rather not. Does she know that, too?

I shove the thought away. What’s in Whitney Chancellor’s mind—and heart—now shouldn’t matter. She made a choice, and I’m going to make her regret it.

You made a choice, too. And she probably hates your fucking guts for it.

But that doesn’t change anything. If she doesn’t show today, I’ll keep coming at her. I have ways to bend her to my will.

She will give me what I want.

I tap an impatient thumb on the charred wood of the handscraped bar. The faux-rustic room is designed to be a “laid-back” watering hole, but since it sits in the middle of a horribly pretentious hotel in an exclusive, five-star part of town, I’m calling bullshit.

I’ve been here ten minutes, and I already despise this place.

No shit. But this site is less than two miles from her house, so I’m here.

It’s been eight years, and I traveled halfway around the world for this. For her.

That doesn’t mean she’ll come, especially since you ordered her to.

In hindsight, that may not have been my best strategy, but cushioning my approach would have been counterproductive. It’s best if she understands I’m a world-class bastard, and nothing—not even her—will soften me.

Whitney has probably discerned that. After all, I’ve put her in a terrible position. One of two things will happen next: she’ll sweetly capitulate like she seemingly did all those years ago…or she’ll tell me to go fuck myself. With her, I’ve got a fifty-fifty shot.

At the sound of heels clicking across the tile floors in the otherwise empty bar, I snap around.

And I nearly drop my jaw.

Holy motherfucking son of a bitch.

Why is Whitney still so beautiful that, when I see her, I struggle to string two thoughts together?

A band of fabric hugs her neck like a collar. Intermittent, gradually widening strips—strung together only by a loose lacing of satin playing a daring peekaboo with her exposed skin in between—tapers down, ending with a black leather belt that cinches her small waist. Her shoulders are covered. So are her tits—barely. But I can’t not see their tempting swells or the soft valley in between. The skirt ends halfway down her sleek thighs where another subtle row of crisscrossed ribbons mirrors the bodice detail just above her flirty hem.

Two things are immediately obvious: I still can’t look at Whitney without desperately craving her, and she isn’t wearing a goddamn bra.

This dress would make any other woman look like a whore. Somehow, she elevates it to elegant.

Clearly, she came to make me suffer.

She stops at the bar less than three feet from me, and I’d be a lying SOB if I said my heart wasn’t pounding.

She turns to glance at me over her shoulder, hazel eyes full of anger. “Jett. What do you want?”

“To talk.” For starters.

“I don’t have anything to say to you.”

“So you don’t want to save your brother?”

Her expression spits hostility. “You know I do. Or I wouldn’t be here.”

Yes, just like I know she’s incredibly loyal to him. She’d do anything for him. I’m banking on that.

Whitney sets her small, chic purse on the bar, laying her left hand on top of it. She’s wearing an engagement ring.

Fuck. It’s not even subtle. It’s a statement rock, designed to flash a warning to every other man to back the hell off.

Too bad for her fiancé nothing will make me comply.

“Congratulations.” I cast a pointed glare at her ring. “Who’s the lucky dick?”

“None of your business. I presume you summoned me here to negotiate?”

By sheer willpower, I stopped myself short of doing something her very affluent family would have insisted I go to prison for.

In the end, my restraint didn’t matter. Nearly slipping that one moment cost me everything.

Her hypnotic eyes aren’t filled with innocence anymore. Nope, when she looks at me now, I see venom.

“What’s your offer?” she demands.

She scoffs. “Let’s not pretend I matter to you.”