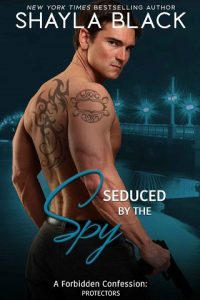 The sun is about to set. The streets are slick from the shower that doused me as I rushed to my car. My clothes stick to my skin, from the low dip of my soft pink shirt all the way to my beige wraparound skirt. What was a more demure than daring slit this morning now clings uncomfortably to my damp thighs.

Rush Garrison probably got caught in the rain, too. I would have loved to see his crisp black dress shirt plastered to his broad shoulders, hugging all the rippling muscles of his torso…

Dream on. He doesn’t remember you. It’s been years. And he’s head of the hotel’s security now, so he’ll never notice you except as a fellow employee. Go out with Paul in Accounting. He’s asked three times.

I just can’t bring myself to say yes.

With a sigh, I pull my little Fiat into the carport in front of my historic cottage, grab my purse, and dash through the deluge up my brick walkway. Finally under the cover of my porch, I stop to catch my breath and turn. I have to laugh at the crazy sheets of rain still pelting the street.

It’s been a hell of a day. Bryan Russell, my boss, was holed up in a mysterious meeting for hours, the hotel is filling up fast with out-of-state guests for another unseasonably warm weekend, and some creepy guy hung out in the lobby most of the afternoon to stare at me. I handled everything, of course. But now? TGIF, and I’m scheduled for some days off. I have all blessed weekend to curl up on my sofa with a glass of wine and the pile of super sexy romances on my e-reader. Okay, I have to do laundry, too. But the rest of the time, it’ll be nothing but fictional hot sex. I can’t wait!

Oh, don’t lie. You’ll be fantasizing about Rush, too. A lot.

I can’t deny that…

As I scramble for my house key, the rain suddenly stops in typical Florida fashion. I laugh again.

“Hi, honey!” elderly Mrs. Crafton calls across the street as she emerges through her front door, waving at me as her poodle, Muffet, sniffs around in the thick grass for a place to do its business.

“Fine. Just fine.” She stands under her porch lights and eyes my Fiat. “You going to get a more reliable car someday?”

I should. It’s a menace. It only works sometimes. It doesn’t go very fast and it costs an arm and a leg to fix, but my father bought it for me as a present when I graduated from high school a few years back because that’s what I wanted. He even had it painted Tiffany Blue—my favorite.

Shortly after that, he told me to wait here for him. He had an overseas mission, and he’d be home…eventually. He’s been a spy half my life, so I’m used to him being gone. In his absence, I’ve done everything he asked. I started night school. I got a good job. Sure, he calls periodically, but it’s been a few weeks now. And he’s been gone two years next month. Every time I think about that, I have to force down panic. Daddy has never not come back, but this is the longest I’ve gone without a visit from him.

I’m scared he won’t make it home this time.

He gave me no direct way to communicate with him. He left me a number to call in case of emergency. And by emergency he meant that my life was in imminent danger. So unless something terrifying happens, I’m forbidden to call that lifeline. I don’t even know who would answer.

Mrs. Crafton shakes her head at me. “That heap isn’t safe. You should get a man to help you fix that blasted car next time it breaks down.”

Some months I spend more on fixing it than I do rent, but I love the car. Every time I get behind the wheel, I see Daddy squeezing in beside me, giving me a smile of encouragement, and telling me I’m doing great.

I cling to that image.

“Maybe that hunk at work you’re gaga for?” She wags her gray brows at me.

“That’s old-fashioned, Edna.” Besides, Rush doesn’t have any interest in dating me, much less fixing my car.

“That’s practical, honey. And speaking of practical, I saw a guy wander into your backyard about an hour ago. I think he came to read your meter, so you should budget for another gas bill soon.”

Already? I just received one a week ago. Ugh.

“Thanks for the heads-up. Don’t let Muffet wander into the mud.” I point to her dog, now trotting happily toward a puddle after visiting the groomer yesterday.

“Damn it.” She charges after the bit of white fluff.