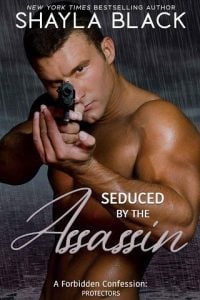 The woman I can’t forget is through that door, less than ten feet from me, working. There’s a lock separating us, but that’s not enough to keep me from her.

I swallow, gripping the gift box in my hand. Will she be surprised? She’s smart; she should be expecting me. After all, I made her a vow. I splayed her thighs indecently wide on my kitchen counter, stared into her golden eyes, and promised I would come for her the day she turned legal. Then—somehow—I managed to tear myself from her kiss-swollen lips before I did something irredeemable, and I left.

Now I’m here, and I’m done waiting. After seven agonizing weeks of putting space between Havana Smith and me, the unstoppable force of our attraction has me sniffing her out like a damn rutting dog.

If she falls into my arms again, I won’t stop.

So why am I standing out in the rain, hesitating?

Because I’ve lost my fucking mind.

I used to be a sane man. Well, as sane as anyone in my line of work can be. But now I’m certifiable. I’m probably on the verge of making the biggest mistake of my life and I don’t give a fuck.

I’m thirty-four…and I’m in love with a girl who’s turning eighteen today. I’m in the middle of some really dangerous shit. Oh, and did I mention she’s my son’s ex-girlfriend? Yeah, this won’t be complicated at all.

Suddenly, my phone rings. Cursing, I look at the screen and sigh. My brother Rush. He married his longtime crush a month ago, and they’ve been on a perpetual honeymoon since. I’m happy for them. Despite the fact their wedding was last-minute, it was perfect and moving.

My brothers are happy now—all except Ridge, who’s too crazy for any woman to marry. But Rand and Rush? Good for them, even if I’m jealous as hell.

You could be happy, too. Pick that lock, walk through that door, and lay your heart at her feet.

Havana will probably laugh—and she should. I’m almost twice her age. The profession I’ve chosen means I’m destined for an early grave. Besides, she needs someone good. That’s not me. Unfortunately for her, that won’t change her fate.

On the third ring, I finally decline my brother’s call and tuck the device away. I’ll ring him back later. I’m not in a hurry for him to rub my face in the happiness of his marital bliss, which I know he means to inspire me to find some nice woman who will spoil me and my son and make us the family we’ve never quite been. I should want that, I know. But Ethan is grown now. I’m too late. And Rush’s nudges in that direction only make me feel guiltier.

Suddenly, the back of my neck prickles. It’s a warning. Danger.

Someone has eyes on me.

Pocketing the gift box and melting into the shadows, I scan the run-down strip mall in this crime-ridden part of northwest Vegas. Here, gang activity is high and police presence is low. I hate that Havana works and lives in this neighborhood. I want to take her from the crime and the danger and keep her safe.

But gangs and thieves aren’t on my radar now. I’m the thing they fear, and they don’t fuck with me. Someone is, though. I’m definitely being watched.

Jesus, I should worry whether I’m deluding myself into thinking I can give Havana the stability she needs—but I don’t dare now. In my line of work, even a few seconds of inattention can be fatal.

Another sweep of this corner of shopping hell doesn’t put me at ease. Most everything is closed now in this seedy section of the city. Across the lot, a woman locks the door of an off-label clothing store and runs for her car like a deer sensing a hunter. As she drives off, I see a couple of blue-collar guys at the far end of the strip, eagerly heading into a dive bar on a Saturday night to stare at scantily clad waitresses whose tits they’ll never get to feel.

They disappear inside. The light at the corner turns green. People go about their lives.

But someone is trailing me. I need to lose him.

How the fuck does anyone know where I am? Since I didn’t want to risk Havana, I didn’t tell a soul where I was going. No one should be on to me. Was I so fixated on her that I got sloppy and allowed myself to be followed?

Suddenly, a car screams across the lot, high beams blazing in my face. It swerves, spewing up oily rainwater in its wake. The sedan’s window lowers. Something dark and metallic emerges.

I duck and roll as I hear the report of the first shot. The second is an instant behind. The bullet whizzes past my ear.