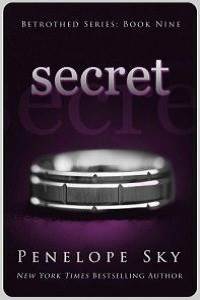 When Heath hung up on me, I didn’t try to call back.

I didn’t know what to feel. I was relieved that I’d called Heath before it was too late, that his heart was still beating when he took my call, that he was still the strong man who looked into my eyes as if there’d never been anyone else.

But I hated myself for what I did to Damien.

My own fucking brother.

For what, exactly? For sex? For some man I vowed never to love?

I sat against the headboard with my knees to my chest, the phone beside me, the screen dark. I was too nervous to turn on the TV or open my device to read. I chose to sit in the dark and wait for any subtle sound in the hope he would approach my door any moment…safe and sound.

Then I heard it, distant and faint, the heavy footsteps of a man coming down the hallway. The only reason I noticed was because I listened for it, waited to hear the sound. There was no one else awake at this time of night, so there wasn’t any noise from my neighbors, no cars passing on the street outside my window.

Maybe my mind was playing tricks on me, but I jumped out of bed and headed to the front door anyway. I unlocked all the bolts and swung the door open, hoping to see that man on my doorstep.

He took the last few steps to my doorway, his blue eyes focused on mine, not blinking, not sharing a single thought. He didn’t seem angry, happy, anything. He was just…cold.

I was so happy to see him that tears formed in my eyes. But I had to ask something first. “Is Damien okay?”

He cocked his head slightly, as if the question offended him, as if he was annoyed I felt I had to ask at all. “Yes.”

“Thank god.” I stepped into his chest and wrapped my arms around him, my cheek moving to his heartbeat so I could feel it thump against my body. My ears could listen to it beat, listen to the way it was so slow and steady.

His hand slipped into my hair while his arm wrapped around my waist. He backed me into the apartment so we wouldn’t be in the hallway any longer. His foot kicked the door shut behind him. He held me tight in front of the door, his fingertips lightly playing with my hair as I continued to grab on to him, to feel my aching heart start to heal now that he was there in the flesh. That was the hardest decision I’d ever had to make, and now that I was deliriously relieved by his return, I realized I had made the right one.

“Let’s go to bed,” he whispered into my hairline before he released me. It was almost five in the morning, so he was probably tired after the long day and night he just had. His fingertips slid down my cheek before they finally broke contact.

Then I was cold.

He entered my bedroom and got undressed. His shirt fell to the floor along with his jeans. His phone and wallet were left on the nightstand next to the right side of the bed he had subtly claimed as his.

We got into bed, and once we were under the sheets, I snuggled into his side, my head preferring his shoulder as a pillow, my arm gripping him like he was a teddy bear and not an enormous, hard man. My leg tucked between his, and I closed my eyes, my anxious heart finally slowing down now that the worst was over.

A quiet breath escaped his lips as his fingers gently slid into my hair, his lips near my forehead. His arm moved over mine, his fingers interlocking with mine on his stomach. There was never a time when he walked through the door and didn’t want me. That was usually his only reason for coming at all. But now, sex seemed to be the last thing on his mind, either because he was too tired or just didn’t care about it at the moment.

That was fine with me. I just wanted him right now, to know he was alive at my fingertips.

I expected him to question me about what I did, to grin and make a smartass comment, to remind me that I broke my own promise just a few weeks after I made it.

I woke up to the sound of him getting out of bed.

The bed shifted then sprang back up once his weight had left the mattress. He was quiet as he left the bedroom, but his heavy footsteps became audible once he stepped onto the hardwood floor.

My hand reached for him even though I knew he was gone, and when I felt nothing but the warm sheets he’d left behind, I opened my eyes, my vision blurry, and saw that he was really gone. He told me he would never leave without saying goodbye, so the panic dispersed and I turned back to the clock on my nightstand to see the time.