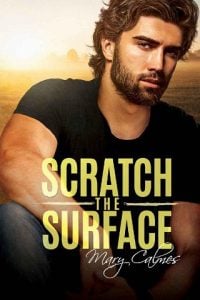 The key card wasn’t working in the lock. Of course it wasn’t. No good deed went unpunished. Shifting his weight a bit so he was leaning on me even heavier didn’t help matters at all. Now I had his face lodged against the side of my neck. And he was drooling.

The thought of having to put the guy down, take the elevator to the first floor to talk to someone at the front desk about recoding the key, just to have to come back up, was not appealing. It had been a mistake to help out Shawn, a classmate of mine, because if anyone questioned me, I wasn’t a guest at the hotel. I was there as an escort, and people heard that and thought prostitute without missing a beat. And while that had certainly been me at one point, that part of my life had been over for the past four years.

I should have stayed home, but Shawn called, pleading with me because he was out of friends and so turned to me, an acquaintance, a classmate, freaking out about how he was stuck in Tahoe and “Could I do him a huge favor?” It would be easy, he’d said, just a nice man who didn’t want to go to dinner alone, nothing more than that. The fact that my bike needed some work—it was twelve years old, after all—hadn’t hurt his chances of me saying yes. Even though Zack, my buddy, said he’d wait a week to collect, until I got my paycheck from my main job, owing anybody for anything never sat well with me. Plus, Zack was a nice guy with a wife and four kids; he couldn’t afford not to get paid. If I could get the money early and get the bike looked at, I could stop worrying it would blow up on the freeway, with me on it.

It had made sense to ride the twenty-five minutes into downtown Sacramento from Barrett Crossing, where I lived, change into my suit, dress shirt, and wingtips, and go sit in the bar and wait for Mark—all Shawn got was a first name—to show up. Several men had glanced my way, and it made sense, not because I was so drop-dead gorgeous but because, as a rule, guys who were away from home, especially in a place like Sacramento, were up for paying for sex. I’d been told many times that places they frequented on business—Manhattan, Atlanta, Denver, Orlando, Los Angeles, San Francisco—forget it, they would never pick someone up there. They might run into them again when they returned with business colleagues or, heaven forbid, when they were vacationing with their families or their partners. It was far too risky. But Sacramento was more of an anomaly. They felt safe inviting me up to their room, because what were the chances they’d ever be back if they didn’t have to be. It wasn’t a tourist destination unless you were dying to see the state capitol.

By nine o’clock, men and women were offering to buy me drinks, but no one who asked if my name was Shawn. I texted him to say his guy was a no-show. His call to me was a surprise.

“Hey, sorry, man. The client just texted Gina, my scheduler, and said his wife showed up outta the blue to surprise him.”

“Gina wanted me to go meet someone else, but I told her it was too late already. She was cool with that, so—” He took a breath. “—sorry to waste your time.”

“I needed the money to fix my bike,” I explained, getting up and heading toward the lobby when a man smiled at me from the bar.

“Don’t sweat it,” I assured him. “You’re as broke as I am, and it looks like I might have a line on something after all.”

“Okay, then, good hunting,” he said with a sigh. “Thanks again.”

He hung up, and I stupidly headed for the bar, thinking it would be quick and easy, and maybe even not as horrible as I remembered.

The guy, who had draped over me like a sweaty meat suit, offered to buy me a drink, and from the look of his Rolex and the large diamonds in his wedding band, I was thinking I could ask for five hundred easy, and I wouldn’t even have to fuck him more than once. But the goddamn bartender would not stop pouring him drinks, and the drunker the guy got, the sadder he got, and then it moved to downright maudlin.

“He said he didn’t love me anymore,” he whimpered, leaning against me as we’d lurched toward the elevator. “Can you fuckin’ believe that?”

I could, since he’d told me the same story five different ways. And leaving hadn’t been a possibility, because every time I tried to excuse myself, he got loud and people looked at us. I couldn’t have that. No one could alert hotel security or I’d get pinched. It was a nightmare.