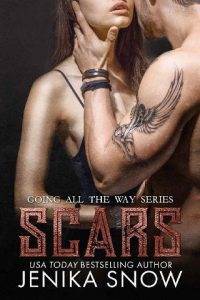 Scars leaned against the meeting table at the Vicious Bastards’ clubhouse and grabbed a cigarette out from the inside of his cut. He knew what expression his face probably held.

Hardness. Finally not giving a fuck.

He placed the end of the cigarette between his lips and patted his pockets for his lighter. The sound of the door to the meeting room closing had him looking over his shoulder and seeing Booshie closing them both in.

Scars grunted and lit his cigarette while staring at Booshie.

After lighting the end of the cigarette, he said, “Hey, man.” Scars tossed his lighter on the table, inhaled deeply, and exhaled just as forcefully. After pulling the cigarette away and glancing at it, Scars took one more hit before snubbing it out. “I really need to quit this shit. I told Stella I would, and look at me smoking.”

There was a moment of silence before Booshie responded. “It’s a hard habit to kick.”

Scars nodded and stared at Booshie for long seconds, before finally asking, “What’s up? You look like you got something on your mind.”

Booshie pulled out a chair and sat down a little ways away from him.

Scars looked out the window, waiting for this to be over with. He really didn’t want to get into this with him right now. He knew his VP was probably well aware of the way Scars had been pulling away, retreating into himself.

“Scars.” The sound of Booshie saying his name with exhaustion finally had him turning and facing his brother-in-arms. “I’m your VP, your second in command, and I have known you longer than anyone else in this club.” He left it open like that.

He knew what Booshie was doing. The other man was letting Scars know they were close and therefore needed to trust each other.

Scars sighed, ran a hand through his dark hair, and finally nodded. “Yeah, man, I know. I guess I’m just feeling my age.” And he was. Fuck, he was. He was feeling a hell of a lot more than that, but he didn’t say that outright.

“You act like you’re Ranger’s age.” Booshie grinned, which in turn had Scars smiling too, giving the other man a deep-chested chuckle. “But seriously, what’s up?”

Scars stayed silent a moment then finally pulled the leather chair out at the head of the table and sat down. “I just think I need to get away for a while, maybe head up to the cabin and just relax.”

Booshie nodded. “Not a bad idea. You live and breathe this club, and while that is what we need, you also need time to yourself or you’ll snap and end up taking out a prospect.” He chuckled.

Yeah, and ain’t that the truth. It wouldn't be the first time one of the members kicked a prospect’s ass to let off steam.

Scars stared at his VP for a moment and finally sighed, really fucking feeling his age lately. “Marriage is next, man,” he finally said, knowing Booshie would know what he was talking about.

His little girl was getting married. Well, Stella was a grown woman now, but in his eyes, she’d always be his little girl.

Scars nodded. “I’m happy for my baby girl. I really am. I feel like a bastard father for feeling this way. I mean, I still remember her running around the clubhouse throwing peanuts at the guys.” Scars started laughing as he pictured that moment.

“Kids have to grow up, man,” Booshie replied after a moment.

“I know, but it makes a guy feel old as shit. It’s like I’m losing the last part of her mother.” That heaviness settled within Scars, and he lifted a hand and rubbed his chest, that ache intensifying. Shit, he wished he could change a lot of shit. It had been a long damn time since he lost his wife, Stella’s mother. She’d been a good woman, strong and understanding, supportive as hell too. She should have never been in this life. They may not have gotten along the majority of the time, and he knew she hated him being in the club, but she stuck it out for their kid.

Then she was gone. Killed by a rival MC that had come seeking retribution. Stella’s mother had been in the wrong place at the very wrong time. Shit, that moment in time had nearly cost Scars his life too.

This life was ugly and violent, but it was all he knew. So after he’d gotten his own revenge, taken out the motherfuckers who’d taken her from him, he’d immersed himself in his club and made sure his daughter always knew she had a family.

Now, she was starting one of her own.

Scars looked over at Booshie and saw the other man shifted in the seat, clearly uncomfortable, because Scars was not a man who showed emotion, and right now, he felt it dripping from him like a leaky faucet.