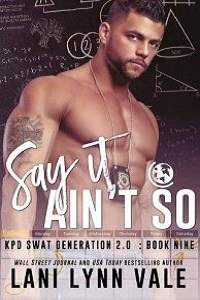 I was normal two arrests ago.

I looked up at our team leader, Bennett.

Bennett was like a second father to me. He had been there when I lost my first tooth. Wrecked my first car. Fucked my first…

“Hey,” I said, viciously cutting off that original thought. “What’s up?”

He looked at me sharply. “You feeling okay?”

I shrugged. “I’ve been better.”

In fact, I had been better.

My throat was on fire, my eyes felt like they were about to pop out of my sockets thanks to the pressure headache behind them, and to top it all off, I was running a low-grade fever.

“You look like a pile of dog shit,” Bennett offered. “Where’s your uncle?”

My uncle Foster also was one of the team leaders.

“He’s not coming today,” I murmured, closing my eyes as the headache pounded harder. “He said he told you that.”

“I was hoping that he wasn’t serious,” Bennett admitted, sounding annoyed and amused all at once.

I snorted. “Apparently he doesn’t want to be on national television,” I said.

“He thinks that I do?” he asked, sounding miffed.

Neither did I. But I hadn’t gotten the choice.

Honestly, I thought both of those assholes should be here. I mean, we weren’t the ones that had asked to be on fucking calendars. They were the ones to tell us we were doing it. We hadn’t even gotten the choice to say yes or no.

I would’ve rolled my eyes, but I knew if I did, that would make my headache worse.

So instead, I just made a pitiful sound of ‘meh’ before walking away in search of my locker.

There I knew I had ibuprofen. I also had Tylenol.

Sadly, that’s where everyone else knew I had the shit, too.

Getting to my locker finally, I opened it to find both damn bottles empty.

“Son of a bitch!” I growled, tossing the bottles to the trash can that was across the room.

I missed both, causing the men in the room to look at me with a frown.

Normally I made it.

I played basketball in high school and in college.

I wasn’t good enough to go pro or anything, but I should’ve made a bottle into a trash can from five feet away.

“You okay, man?” Saint, one of my fellow members of the SWAT team, looked at me with worry in his eyes.

I looked over at Saint then back at my drug-free locker.

“Someone used the last of my meds and I need some,” I grumbled.

“Yeah, that was me,” Louis said as he came up with a beer in his hand. “I apologize.”

I sighed and looked at Louis, my cousin and also fellow SWAT team member.

“Next time you empty it, just tell me. Then I wouldn’t be standing here, thinking I had meds in my locker to take for this fuckin’ headache, when I don’t,” I grumbled.

“I just took them like twenty minutes ago. I was waiting for you to get here to tell you. But I actually ran to the liquor store next door to see if they had any, because I honestly feel like that would be great to have there. I mean, buy the beer and vodka that you’re gonna drink, then grab the ibuprofen that you’re going to need to take the next morning for your hangover. One stop shop, you know?” He paused for a breath. “Long story short, they didn’t have any. But they did have beer.”

He handed me a beer, and the sad thing was, for once I was too fuckin’ sick to drink the beer. Hell, at this point I didn’t even think I could get the top off.

“My dad probably has some in his office,” Derek suggested.

Derek was the chief of police’s son and one of my really good friends from childhood.

When the second-generation SWAT team first formed, a lot of ‘SWAT kids,’ as we liked to call ourselves, had gotten home from the military at or around the same time. Derek, Louis, Booth, Bourne, and I had decided to join up. Though Booth had come a little later to the party than the rest of us.

The others that joined—Dax, Hayes, Adam, Nathan, Ford, and Saint—had quickly fallen right into our circle.

The last one to join, Malachi, slid right into place to solidify the SWAT team’s final piece.

They were like my brothers now. Annoying, asshole brothers that took my shit and didn’t replace it.

But I wouldn’t trust another fuckin’ person with my back like I did them.

“They’re ready for us,” Hayes grumbled as he walked through the door.

Hayes and Malachi were likely the least excited about this endeavor.

Neither one of them liked the media attention, and even worse, both of the men were scarred and had PTSD, which they fuckin’ hated talking about. Which was inevitable that someone would bring it up just to ask about it.