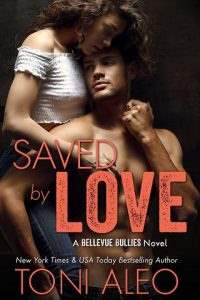 It’s hard not to look back at life and wonder how in the world I ever lived without Nico Merryweather.

I’ll never forget the moment I met him. In our sub shop with gooey eyes for my sister. In true Aviva style, she wasn’t having it, nor was she even trying to date anyone. But Nico was ruthless. He knew what he wanted, and soon, my sister realized her future would include a six-foot-seven professional goalie who would give her anything she ever could want. Not just material things either, but unconditional love. Now, after selling the sub shop, they’re married with a little baby boy—my world, Vance. I thought I loved my sister and Nico, but Vance, man, that kid has my heart. Since I’m the only sibling between Nico and Aviva, I’ll obviously be his favorite aunt, which is good since I have a shirt, socks, and shorts with his face on them.

Vance’s curls tickle my nose as I hold him to my chest. I’m sure the loud noises and flashes of cameras are making him nervous, but Nico was adamant about having him here too.

Here, being a press conference all for Nico. Not the IceCats or the captain or Owen Adler, who is always being asked why his twin brother, who is a badass defensemen, retired from the NHL. No, none of them. Just Nico.

Since we are a part of him, we stand by his side. I flew in this morning and have to fly out tonight to be back in the Bellevue Bullies’ gym tomorrow, but it’s okay. I wouldn’t miss this for anything. I want to be here for Nico, and I’m glad I am. I feel his nerves coming off him in waves. He always gets this tic in his jaw when he is overwhelmed. We know this about him, so Aviva holds one of his hands in both of hers as I hold the other tightly. Just so he knows we’re here and we support him. Love him. God, we love him.

Nico is the dad I always needed. I don’t mean to shit on my dad, but he was as worthless as Frank Gallagher from Shameless. I know that’s rude and really disrespectful, but it’s true. I binged that show when I took Vance at night for Aviva when Nico was at away games, and I’d find myself crying because Frank had to be based on my dad. The similarities are uncanny. When my mom died, my dad decided being a dad wasn’t his jam. I know he could have been suffering from the trauma of losing her, but hell, so were Aviva and I! What about us?

We survived, though. Even through Aviva’s cancer and being broke as jokes. Aviva has and always will be my rock. She made sure I had everything I needed and did everything she could to keep me in the sport I love. I don’t know how many nights she went to the gym to clean or she ran my gymnastics meets for the gym just to pay my tuition. She stepped in and not only became my mom but my dad too. I know it was a lot, but she never gave up on me. I hate feeling this way, but I was her burden to bear, and she wasn’t giving up on me. When Nico came along, he took a lot of that burden from her. He stepped into the dad role, and I couldn’t be more thankful or proud of him for that. He didn’t have to, but he wanted to—thankfully.

I watch the side of his face as he looks out into the crowd while the coach of the IceCats, the hockey team for which he is the franchise goalie, speaks about the start of the season and stuff like that. I’m not really listening; I’m too concerned for Nico. I’ve met this coach a few times and I still can’t remember his name, but today, he isn’t even on my radar. I know how huge this is for Nico, and I almost can’t believe he’s doing it.

When he told me he was giving this press conference and wanted me here, I was speechless. We don’t talk about his autism, even though it’s part of who he is. It’s his superpower. He can do math like no other and keep pucks out of the net like a ninja. I guess since he spent his whole life hiding it, it’s all he’s ever known to do. But that’s about to change.

I look out into the crowd, and unfortunately, I see his mom. I don’t like his mom, but since I’m away at college in Nashville, Tennessee, I don’t have to deal with her a lot. Ever since she outed him for his diagnosis, I have disliked her. Surprisingly, she’s good to Vance—but let me find out that changes, and Aunt Callie is gonna have some words. I would honestly kill for my little dude. Hell, all my family.