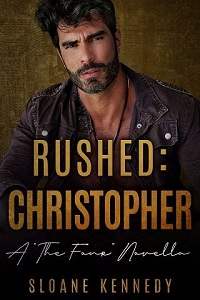 I knew we were in trouble from the second the beefy-looking bouncer smiled at us and waved us past without asking for ID. If that fact alone hadn’t been enough to assure me that this was a really, really bad idea, the huge man clinched it by settling a knowing grin (and not the good kind) on us and adding, “Have fun, boys. The guys are just going to eat you up.”

Say something, Christopher! Do something!

It was my own voice I was hearing in my head, and it had been screaming those same words into every brain cell since I could remember. But just like all the other times, I kept my mouth shut and followed my best friend and quasi-cousin, Gio, into the club.

The air inside was thick with the stench of sweat, sex, and weed, much like the smell of the house I’d spent the first fourteen years of my life growing up in. Just like back then, it made me sick to my stomach. So did the all-too-familiar sight of people fucking in plain sight. That had been a staple in my childhood home too, just like all the needles and glass pipes that had been lying on every usable surface in every room of the house.

I’d always been safe in my room, lost in a book so I wouldn’t have to hear any of what had been happening on the other side of that door. My uncle Micah had always made sure he was between me and whatever dangers lurked outside my precious stories and that weak, worn wooden door.

No matter what it cost him.

My body jerked when I saw two guys fucking up against the wall. The bigger guy had the smaller one pressed face-first against the rough-looking surface. My vision dimmed as a wave of unbearable heat flashed through me followed by an equally painful, bitter cold that made my veins feel like ice.

I could feel the hot breath on the back of my neck as the stench of cologne wafted all around me.

A bright flash of light thankfully brought me back to the present and saved me from what could have been the panic attack from hell, but the relief was short-lived as I realized we were in the main part of the club and the interior was a brighter, louder, more crowded version of the hallway.

I wanted to turn tail and run. I wanted to beg Gio to forget his mission to confront the man he’d long ago lost his heart to. But my best friend needed closure, and there was no way I could leave him alone in a place like this.

But even as I vowed that this time I wasn’t going to be the pathetic coward that I was, my mind was screaming at me that this was all wrong. I could feel the eyes on me. Even though Gio was drop-dead gorgeous with his pale hair and fair features whereas I wouldn’t stand out in a crowd even if I was on fire, I knew that in this terrible, dangerous place, we were the same in one chilling way.

We were both prey.

“Gio, we should go,” I managed to choke out. My skin itched, and I couldn’t breathe. My body felt like it weighed a thousand pounds instead of the whole hundred pounds soaking wet that it actually did.

“Yeah,” Gio responded unexpectedly. The mere fact that he was agreeing with me was proof that we were way in over our heads. I tried to take in a deep breath, but all I got was lungs full of smoke.

I was practically glued to Gio’s side as we turned and began making our way back the way we’d come, but we didn’t make it more than a couple of steps before three behemoths stepped into our path. Gio stuck his arm toward me, and coward that I was, I took his hand and let him place me at his back so that he alone was facing what I knew in my gut was a very real threat.