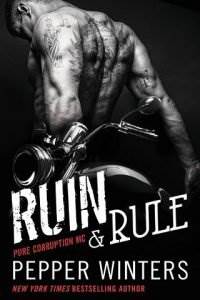 We met in a nightmare.

The in-between world where time had no power over rhyme, reason, or connection. We met. We stared. We knew.

There was no distortion from the outside world. No right or wrong. No confusion or battles from hearts and minds.

Just us. In our silent dreamworld.

That nightmare became our home. Planting ghosts, raising fantasies. Entwined together in our happily skewed reality.

We fell in love. We fell hard.

In those fleeting seconds of our nightmare, we lived an eternity.

But then we woke up.

And it was over.

I always believed life would grant rewards to those most worthy. I was fucking naïve. Life doesn’t reward—it ruins. It ruins those most deserving and takes everything. It takes everything all while watching any remaining goodness rot to hate.

That was my world now. Literally and physically.

The back of my skull hurt from being knocked unconscious. My wrists and shoulders ached from lying on my back with my hands tied behind me.

Nothing was broken—at least it didn’t feel that way—but everything was bruised. The fuzziness receded wisp by wisp, parting the clouds of sleep, trying to shed light on what’d happened. But there was no light. My eyes blinked at the endless darkness from the mask tied around my head. Anxiety twisted my stomach at having such a fundamental gift taken away.

I didn’t move, but mentally catalogued my body from the tips of my toes to the last strand of hair on my head. My jaw and tongue ached from the foul rag stuffed in my mouth and my nose permitted a shallow stream of oxygen to enter—just enough to keep me alive.

Fear tried to claw its way through my mind, but I shoved it away. I deliberately suppressed panic in order to assess my predicament rather than lose myself to terror.

My senses came back, creeping tentatively, as if afraid whoever had stolen me would notice their return.

Sound: the squeak of brakes, the creak of a vehicle settling from motion to stopping.

Touch: the skin on my right forearm stung, throbbing with a mixture of soreness and sharpness. A burn perhaps?

Smell: dank rotting vegetables and the astringent, pungent scent of fear—but it wasn’t mine. It was theirs.

It wasn’t just me being kidnapped.

My heart flurried, drinking in their terror. It made my breath quicken and legs itch to run. Forcing myself to ignore the outside world, I focused inward. Clutching my inner strength where calmness was a need rather than a luxury.

I refused to lose myself in a fog of tears. Desperation was a curse and I wouldn’t succumb, because I had every intention of being prepared for what might happen next.

I hated the sniffles and stifled sobs of others around me. Their bleak sadness tugged at my heartstrings, making me fight with my own preservation, replacing it with concern for theirs.

Get through this, then worry about them.

I didn’t think this was a simple opportunistic snatch. Whoever had stolen me planned it. The hunch grew stronger as I searched inside for any liquor remnants or the smell of cigarettes.

Had I been at a party? Nightclub?

I hadn’t been stupid or reckless. I think…

No hint or clue as to where I’d been or what I’d been doing when they’d come for me.

I wriggled, trying to move away from the stench. My bound wrists protested, stinging as the rope around them gnawed into my flesh like twine-beasts. My ribs bellowed, along with my head. There was no give in my restraints. I stopped trying to move, preserving my energy.

I tried to swallow.

I tried to speak.

I tried to remember what happened.

I tried to remember…

“Get up, bitch,” a man said. Something jabbed me in the ribs. “Won’t tell you again. Get.”

I froze as my mind hurtled me from present to past.

I’ll miss you so much,” she wailed, hugging me tighter.

“I’m not dying, you know.” I tried to untangle myself, looking over my shoulder at the FINAL CALL flashing for my flight. I hated being late for anything. Let alone my one chance at escaping and finding out the truth once and for all.

“Call me the moment you get there.”

“Promise.” I drew a cross over my heart—

The memory shattered as my horizontal body suddenly went vertical in one swoop.

Who was that girl? Why did I have no memory of it ever happening?

“I said get up, bitch.” The man breathed hard in my ear, sending a waft of reeking breath over me. The blindfold stole my sight, but it left my nose woefully unprotected.

My captor shoved me forward. The ground was steady beneath my feet. The sickness plaiting with my confusion faded, leaving me cold.

My legs stumbled in the direction he wanted me to go. I hated shuffling in the darkness, not knowing where I came from or where I was being herded. There were no sounds of comfort or smothered snickers. This wasn’t a masquerade.