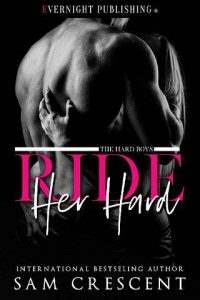 “How do you get women to, you know, eat?” Rome Hard asked.

James looked at his youngest brother, brow raised, wondering where the question had even come from.

“But seriously, there’s no way a woman can survive on celery. I don’t get it.” Rome pouted and fingered his food like it had some kind of disease.

“Maybe you should offer to pay for more than a salad,” Caleb said. He was the middle child, covered in ink—the rebel.

James watched his brothers, smirking as Rome tried to find something to throw at Caleb.

“I did offer to pay for whatever she wanted. I had a big juicy steak, and what did she have? Carrot sticks. Who orders salad without all the trimmings, at least? What about a dressing? Ugh, it made me uncomfortable. How can I even enjoy my food when I’m sure she didn’t even put it to her lips?” Rome wrinkled his nose.

“Who was your precious date?” James asked.

Caleb groaned. “Nah, you see, there’s no way you’re getting much more than your di— I mean, er, there’s just no way you’re going to get much past her lips besides what she wants.”

James snorted, trying to hide it in his coffee cup. Their father glared at them, and then Jane shook her head. “Oh, please. You think I don’t know what you boys are talking about? I’m not some little virgin and I’m under no illusion about what my boys are capable of either. I’m also very much aware that Miss Wire has tasted all three of my sons at one time or another. Didn’t she go to school with you, James?”

“Don’t even try to pretend you boys are innocent. You’re Hard boys, and I know what the girls all say. Once you’re hard, there’s no stopping until you’re … well, not.” She put her hands on Theodore’s shoulders.

Their father looked up at his wife with all the love in the world shining in his eyes. “We were young once.”

“Boys, I used women. Took them, discarded them.”

Jane smiled. “Until he met me.”

“First woman in the world to never give me the time of day.” Theodore grabbed her hand, pressing a kiss to her inner wrist. This wasn’t the first time they’d heard this story. It was one their parents had told them many times.

“There was no way I was going to give my love to a man who liked to crush women’s hearts. That wasn’t who I was.”

“I pursued her for months. It took us making a bet to actually getting you to go out with me.”

“Only because you saved the cat in the tree and poor Whiskers hadn’t eaten in days. I was worried.”

Their mother was an animal lover. They had six dogs, four cats, and she’d even tried to adopt a small farm, but that was when their father had put his foot down.

“How does this help me to get a woman to eat?” Rome asked.

Jane laughed. “Find the right woman and believe me, you’ll know when she’s the right one. For now, do with Catherine what I know you care about. Boys. They really think we don’t know what’s on their minds.” She left the kitchen to go out to feed the dogs.

“Are you really hung up over Catherine not eating?” Caleb asked.

“Is this because you kept giving your favorite teacher all of your candy and fruit?” James asked.

Everyone knew when Rome was fifteen years old, one of the youngest teachers at school, Miss Evergreen, captured his heart. He had the biggest crush on her, and it was one of the first times a Hard boy became a nerd. Their reputation was fundamentally ruined because of it.

There was no way anyone could call him or Caleb a nice guy.

Rome glared at him. “I guess you’re going to start looking at all the pretty flowers now, aren’t you?”

“Why are we talking about flowers?” Jane asked, coming back into the kitchen, a little out of breath.

“Eliza is coming back to town,” Caleb said.

“Elizabeth Reid,” James said. “She’s coming back to town, living with her Aunt Betty again.” His jaw clenched as Rome started to smirk.

“You were going to ask her to prom,” Rome said.

James looked at his coffee, seeing it as far more inviting than anything else in their conversation. He didn’t need to hear what his brothers thought. Eliza. She hated her name Elizabeth. He never knew why, but whenever someone called her by her full name, she’d always correct them, and say Eliza. Even teachers.