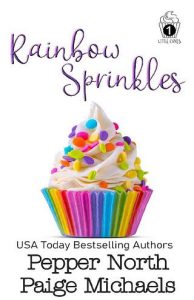 Welcome to Little Cakes, the bakery that plays Daddy matchmaker!

Ellie Wilmoth has dreamed of owning her own cupcake bakery. Now that Little Cakes is about to open, nothing can distract her. Okay, maybe one thing. While crafting her first featured cupcake, she’s interrupted by her handsome new landlord, and his commanding presence is impossible to ignore.
Garrett Erickson is enchanted by the sprinkle-covered, sugar-fueled woman renting his property. When he discovers her alone behind an unlocked door in the predawn darkness, his protective instincts won’t be ignored. Is it possible she’s the Little he’s been looking for?

“I can’t believe it’s finally happening,” Ellie exclaimed as she spun around in a circle, taking in the space she’d just rented.

“We did it,” Lark responded as she tucked the lease papers back into her briefcase. “It’s official. Knowing how passionate and hardworking you are, Little Cakes will be open for business in no time.”

Ellie couldn’t stop grinning as she faced the front windows. “I’m going to put the most amazing cupcake display in front of the windows.” She turned to the right. “And this wall can have cute gifts.” She spun a one eighty. “And little tables and chairs over there…”

Lark laughed. “You have it all figured out. I know it’s going to be fabulous. I can’t wait to try all your cupcakes.” She patted her stomach. “I’m gaining weight just thinking about it.”

Ellie giggled and clapped her hands together before rushing over to give her friend a hug. “I can’t thank you enough for helping me find the space.”

Ellie leaned back, still holding her friend’s shoulders. “You’re still the best, and I appreciate everything you did to make this possible.”

Lark smiled, her voice dipping. “I’m still sorry about your grandmother’s passing, but I know she would be tickled to find out you’re making your dreams come true with your inheritance.”

Ellie nodded. She hated that her grandmother was gone. The woman had raised her from the time she was five, when her mother took off and never returned. For twenty-five years, it had been Ellie and her grandmother against the world. Now, Ellie had no living relatives, but she knew her grandmother would be so proud of her.

It was all coming together. Ellie had quit her job working as a pastry chef in one of the local exclusive hotels and taken the plunge.

In a few short days, Little Cakes would be open for business.

“Little Cakes, Little Cakes, we should all eat Little Cakes,” Ellie sang at the top of her lungs to the music playing in the background as she twirled around the giant kitchen. “Pink and blue, red and green, it’s all about delicious frosting…”

Suddenly, a large presence caught her attention, looming in the doorway to the back section of her store. She screamed, flinching so hard at the same time the cup of flour in her hands went flying into the air all around her.

The man rushed forward. “I’m so sorry. I didn’t mean to frighten you.”

Eyes wide, she backed up so fast she almost fell from slipping on the flour-covered floor. “Who are you?”

“Garrett Erickson. I own the building. I’m terribly sorry. I assume you’re Ellie Willmoth.” He stopped advancing and pointed over his broad shoulder. “I knocked several times, but you couldn’t hear me over the music.”

Ellie was breathing heavily as she flattened her hand over her chest. “You scared me to death.” She reached over to turn off the music coming from her cell phone.

“My apologies.” His expression was sincere. She had to give him that. And she recognized his name. She hadn’t met Garrett Erickson yet, but she knew he owned the strip mall where she was renting her space. He was tall with dark hair that was graying at the edges. So handsome. Piercing green eyes she could get lost in.

He glanced around. “I saw the lights coming from the back of the shop and was worried. What are you doing here at two in the morning?”

She took a deep breath to slow her racing heart rate. “Baking, of course. I’m planning to open next week. I’m still experimenting.”

“In the middle of the night?”

She shrugged. “I lost track of time. I do that when I get in the groove.”

He glanced around her space again before facing her. His expression was curious, a combination of a smirk and a frown. His brows were furrowed as if he were about to lecture her, but his lips were lifted as if he might chuckle instead.

And what was she thinking? Lecture her? He didn’t know her well enough to comment on the hours she worked. It wasn’t as if she was not permitted to work in her store any hour of the day or night she pleased.

He continued forward until he stood across from her on the other side of the island where she’d been mixing her next batch of cupcakes. “Are you always this…messy?”

Her back stiffened, and she straightened her spine so that she stood at her full height of five-three, while he had to be six foot. She brushed a stray lock of hair from her face, realizing not much of her thick, shoulder-length, brown hair was still secured in the ponytail she had gathered high on her head. “I prefer to call myself creative,” she stated defensively.