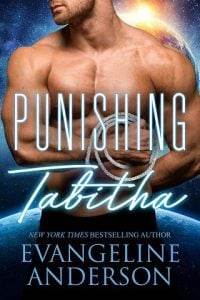 “Next up to the block, this fine piece of female flesh from Old Earth. Look at those tits, gentlemen—firm and plump, those rosy red nipples just ripe for sucking. And the cunt on her—I’ll swear on whatever god you like that I’ve never felt a tighter one in all my years as a slaver. And this sweet little mouth—just perfect for sucking cock…” The slaver had to snatch his hand away quickly before a set of even white teeth snapped off several of his fingers.

Damn, missed! Sergeant Tabitha Bryce glared at her captor as he jerked his chubby digits out of reach. His fingers weren’t the only thing she’d like to bite off, but with her wrists chained to the high stone arch above her, she was limited as to her options. She was kneeling naked on a hard wooden stage and by the stains on the planks beneath her she was guessing that it had seen plenty of blood, sweat and tears, not to mention other body fluids over the years.

“As I was saying before I was so rudely interrupted, gentlemen, this little Earth female has a lot to offer.” Lightly, the slaver touched her nipples with his long, thin wand and Tabitha felt coolness immediately followed by growing warmth as a pale pink gel was brushed over her captive peaks. Not again! She gritted her teeth, knowing what was to follow.

The Drusinian love knots she wore around her nipples responded to the gel and tightened convulsively, pulling taut the slender silver cord that led down to her spread pussy. Tabitha gasped and bit her lip against the alien sensation as the knot that surrounded her swollen clit tightened as well. She swore aloud as her back arched in involuntary and unwanted pleasure and glared at the slaver, hatred burning hot in her pale blue eyes.

“She’s got a temper!” one of the prospective buyers yelled from the crowd and there were murmurs of agreement from the men around him.

“The more fun to tame her, gentlemen!” the slaver assured them. “After all, who wants a wilting flower when you can have a she devil instead?”

“A wilting flower ain’t likely to bite off yer dick,” shouted another man. His words raised a general shout of laughter in the hot, dry air of the Orthan market place. Tabitha threw back her long mane of silvery blonde hair and bared her teeth. Maybe if she could make herself unattractive enough, V wouldn’t be able to sell her.

Seeing what she was doing, the slaver leaned down and whispered in her ear, “Ruin this sale for me, girl, and I swear I’ll give you for free to the lowest, most disease-ridden brothel on the planet before sundown.”

Tabitha started to bare her teeth again and then thought better of it. V hadn’t gotten the reputation of being the most ruthless slaver in the galaxy by playing nice. If he said he’d give her to the worst place possible, she believed him. But damn it, she didn’t want to get sold or given away at all, especially not to one of the characters standing below the wooden stage and ogling her naked body. Some of them were obviously just casual shoppers, the idle rich of Ortha Six interested in seeing a free show. But some of the men in the crowd had the hard-bitten look of career criminals. If she was bought by one of them, Tabitha was pretty certain she’d have a miserable life until her crew came to find her. If they came to find her, that was. It wasn’t like she’d told anyone where she was going or what her plan was.

Stupid, stupid, stupid! She berated herself for the hundredth time. Stupid to leave her ship and her crew with no knowledge of her whereabouts. Stupid to think she could catch an intergalacticly known slaver like V on her own. And most of all, stupid to let a man like her commanding officer, Captain Keer, goad her into doing so. Not that he’d actually taunted her or ever even remotely suggested she should go off on her own and try something so foolish. No, that had been all Tabitha’s idea. She’d had the crazy notion that she could somehow impress him and win his approval, although why his approval should mean so much to her, she really couldn’t say. After all, Captain Keer was Zentorian, and everyone knew that Zentorians didn’t even have emotions. Or if they did, they certainly didn’t show them.

Why should I care what he thinks? she asked herself. Why should I give a damn? And more importantly, why should I care so much that I go and pull a stupid prank like this and get myself sold at an illegal slave auction?

She had asked herself that question many times but the answer still didn’t come. As the Drusinian love knots tightened around her nipples and clit once more, giving her another surge of unwanted pleasure, she scanned the crowd and thought about how she’d gotten into this mess in the first place.