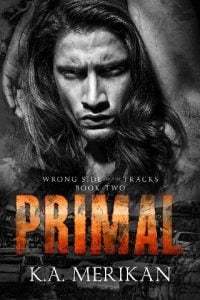 So he looked presentable, whatever that meant, because vulnerable to attack would have been a much more accurate description. The T-shirt of soft cotton had nothing in terms of armor, and the denim fabric making up the pants his friends insisted he wore felt restrictive and wouldn’t allow the wide range of movement Jag was used to. The snow-white shoes Dex had lent him for the night had thick soles with barely any grip. If he needed to suddenly climb somewhere, he’d be fucked.

His friends were both successful at finding partners in their own way—especially Shane, whose sharp jaw, tattooed strong arms, and dark hair managed to attract a beautiful younger mate—but they were also entrenched in the comforts of modern life and didn’t understand that humans wouldn’t have survived so long if they hadn’t been ready for the unexpected.

So, despite Shane insisting Jag couldn’t have any weapons on him in town, Jag kept a little foldable knife in his pocket—just in case he needed to protect himself or show off his prowess at hunting to the man he was about to meet. What his friends didn’t know wouldn’t hurt them.

Dex sat alongside him in the backseat of Shane’s car, and while Jag found it frustrating that he needed help in finding an appropriate match, his hands were still getting clammy. After all, he might be meeting his future mate tonight—a lifelong partner to share his den with, to protect, to dote on, and… well, fuck.

Dex smiled, presenting the massive, sharp teeth tattooed on his throat like a warning to all those who got too close. “If he wants to take you to his place—”

Shane groaned from the front seat and combed his hair back. “Slow down.”

“I’m just saying he needs to be ready. The shirtless photos I took for his profile came out pretty hot if I do say so myself.” Dex winked at Jag, nudging him with his knee.

With his short mop of blond hair, big brown eyes and a healthy complexion adorned with freckles, Dex was an attractive young guy whose habit of walking around shirtless was a source of frequent delight to Jag, but he remained off-limits. Their leader, and the owner of the territory they all lived in, Frank, was Dex’s uncle and had forbidden Jag to claim his young nephew.

So he’d thrown his pride to the wind and asked for help.

He hadn’t expected Shane and Dex to make such a big fuss of the whole thing, but here he was—dressed in impractical attire and with his long brown hair tied back too tightly, all to attract a partner in this frustrating world of tall concrete buildings, unnatural smells, and vast numbers of people whose names he didn’t know.

He flinched when a massive vehicle approached from the other side of the road and shone its lights straight into his eyes, but Shane drove on as if nothing had happened. The closer they were to the city, the more unnerved Jag got. It wasn’t as though he feared the outside world, but the chaotic nature of it often gave him headaches. It was also useful to map out one’s surroundings well enough to know where to run if the need for a quick escape arose, and the few times he’d been forced to board a motor vehicle the world had rolled by too fast for him to make note of landmarks.

Back at the junkyard, he knew every path and turn, including secret passages and shortcuts, hiding places and hidden weapon stashes. But if someone chose to hunt him here, he’d only have his wits to fall back on. Which meant he needed to stay vigilant even in the company of friends.

“And did you write that I can provide for a man?” he asked Shane, grabbing the front seats and peeking between them, at the vehicles rushing down the broad stretch of road ahead like bulls of steel.

Jag had decided to entrust his personal advertisement to the man who’d secured a partner, not to Dex, who might be effective at finding dozens of lovers but hadn’t yet managed to keep one for longer than a week. Living like this, always on the hunt for men, sounded exhausting, and Jag had other things to worry about, like securing his shelter for the upcoming season or guarding their territory.

Shane opened his mouth, and his initial hesitation had Jag worried, but he eventually spoke. “Yeah, I only wrote about the good things. Chill, be nice, start off with a compliment and you’ll be fine.”