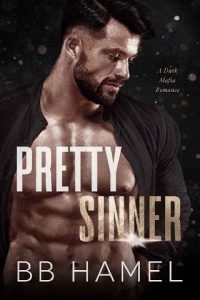 A slender girl placed a fresh sparkling water next to my beach chair and I wondered how many times I’d have to hit her in the face with the glass before she died.

Not that murdering Kaspar’s servants would help, but I was tempted.

“Do you need anything else, Miss Penny?”

She smiled sweetly. She was one of the few staff members that went out of her way to be nice to me.

I’d still choke her if it meant freedom.

She gave me a slight bow then walked off. It was strange how comfortable I was with being served—being given whatever I wanted, whenever I wanted.

Desire could be just as deadly as poison.

But desire sated? That was even worse.

When the serving girl was gone, I got out of my chair and stretched lazily. I let my light cover-up fall down to the sand as I walked toward the clear blue ocean waves. My bathing suit was white—Kaspar said he liked me in white—and slightly too small. Not that it mattered: I was alone as far as I could see, and the jungle forest pressed up against the beach nearby, pristine trees and lush bushes and beautifully blossomed wild flowers in a profusion of oranges and pinks.

I was ready to die to get away from it.

I tipped my toes into the warm Caribbean water. At least, I assumed it was the Caribbean—I didn’t know of any other place with such a beautiful landscape. Nobody at the compound would tell me where we were, and every time I asked Kaspar, he told me not to worry.

Not that I had many chances to ask him. In the week since I woke up in an unfamiliar bed surrounded by unfamiliar furniture and a view of the ocean out my fourth-floor window, I saw Kaspar exactly three times.

And each time, he said the same thing: I was his captive; I was his woman; I would never go home again.

I was determined to prove him wrong.

The water felt incredible as I dipped myself into it. The waves lapped against my thighs then crashed onto my chest. I went deeper, further out, fighting against the undertow then succumbing to its pull. I began to swim, a slow freestyle crawl, angling to the left toward what I assumed was a small port town.

I could just make out some docks, fishing boats, and a few small structures.

There, I hoped some local would take pity on me.

I looked back at the private beach. The serving girl stood in the sand speaking rapidly into a walkie, gesturing for me to come back.

I should’ve killed her while I had the chance.

But I never was as strong as my siblings.

Mother always told me I’d end up dead if I didn’t grow a thicker skin. Chika tried to give me lessons in that weird martial arts she was so good at, but I broke my wrist trying a complicated punch and refused to go back.

Fighting, killing, struggle, even though that was all I knew, I never took to it, not like Darren or Erin.

I was a Servant. I was born to strife and anger and death. I watched my older sister plunge off a roof. I could still hear the sound of her falling: silence and wind.

My breath became labored as I swam toward the docks. They didn’t seem to get any bigger, and after about twenty minutes of kicking and stroking, I began to wonder if maybe, just maybe, I made a horrible mistake.

Here’s the thing about the ocean. It’s really hard to judge distance. On land, there are references: trees, hills, cars, people, whatever. You can guess how far away something is based on how big or small everything else looked.

But on the ocean, there was nothing. Distance was meaningless. Objects that were miles and miles away seemed like a ten-minute trip at most.

As I swam, choking on salt water and my own frustration, I began to accept that I’d made a classic error, and would probably drown because of it.

Which might not be so bad. I didn’t want to die, of course, and dropping under the water from exhaustion seemed like a horrible way to go, but at least I’d be with Livvie again. I missed her so much my chest hurt, and sometimes at night I could still hear her voice and feel her breath against my neck. When we were younger, we used to share a bed, because otherwise the Servant mansion seemed like an enormous edifice to the power of our family, and that was too crushing to face alone.

Then Livvie went and killed herself, and I had to survive without her.

Poor Livvie. I missed her so fiercely, even in the middle of the freaking ocean.

I heard something after an hour. My arms were exhausted. My back hurt. My legs were like jelly. My pace was pathetic and I was pretty sure my shoulders and back were burned raw from the sun. I sputtered and spit and looked back—