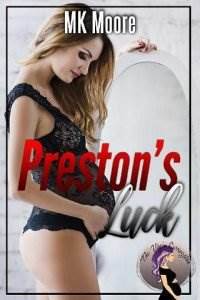 “Jesus Christ, ma. Just give me some fucking space,” I shout at my well-meaning mother, but enough is enough.

“Don’t talk to me like that, Preston. Just because you’re thirty-four years old, that doesn’t give you the right to treat me like shit. Don’t make me make your father beat your ass,” she says, shaking her fist at me. A New Yorker through and through, I have no doubt she would have my dad beat my ass.

“I’m sorry, ma. Forgive me?” I ask, shrugging my shoulders. My Scottish temper going away just as quickly as it came.

“Of course, now why don’t you explain it to me more rationally than whatever the fuck you just said,” she says sitting down in one of the chairs opposite my large oak desk. Growing up in Hells’ Kitchen, we didn’t have a lot, but my parents made sure we had everything we needed. The fifth-floor walk-up, two-bedroom apartment we lived in was cramped with five people living there, but it was full of love. My dad worked for the city sanitation department, what I didn’t know at the time was he was also doing odd jobs for the O’Brien family, the Irish mobsters that set up shop on our block. My mom worked as a secretary for the manager of Bloomingdales in the ’80s and ’90s. When it was time for me to go to college, I applied for many scholarships and ended up meeting my best friends. All from New York, we came up with this plan, each with our own reasons.

“It’s simple. I want a kid but no gold-digging bitch. What’s hard about that?”

“What happened to you?” she asks, shaking her head. “I thought I raised you guys better than this. Your brother is off doing god knows what with as many women as he can get his hands on, your flighty little sister goes from one college to another, looking for what?”

“A rich husband, ma. She wants a rich husband.” My brother, Phillip, is a professional hockey player. He travels a lot and there is no shortage of puck bunnies for him. My sister, Paisleigh, thinks she needs to marry rich in order to get out of Hell’s Kitchen, but no matter how many times I assure her that where you live doesn’t matter, she tries harder to find the man of her dreams. I just pay the tuition for her, it's easier than arguing. Sooner or later, a man will come along and knock her off her feet and I doubt he’ll be anything like she thinks she needs. My brother and I take care of our family. I make more than Midas but I am not a greedy bastard. I’d never leave my family out to dry. Not after everything we’ve been through. “That’s just what I don’t want. Can’t you see that?”

“I guess I can but a surrogate? Really?” she asks, shaking her head. Her wild grey hair is getting wilder.

“Yes. It’s better than a one-night stand that I’d be obligated to for the rest of my life. This way it’s all upfront and no one gets hurt.” Like I’d ever, ever have a one-night stand. I certainly wouldn’t give up what I am saving my future wife just for a one-night stand. Despite not wanting a gold-digging wife, I do want a wife, the one woman I get to love forever. With her, I want a family, lots of kids, even a tiny, yapping dog nipping at my heels, but I won’t compromise everything I’ve ever believed in for a fast and fleeting fuck. I am ready for a child and this is the only way I’ll have that without messing up the rest of my life. I can afford it, and the woman I eventually love will love my kid too, no doubt about it.

“And you know what you’re doing? It’s a reputable place?”

“Yes, ma. I did all the research. Now I really should get back to work. I have a lunch meeting that I can’t be late for.”

“Alright. I can’t believe I am going to be a grandmother.”

“You’ll be an excellent grandmother, ma,” I say, standing to give her a huge hug.

“Your father is going to flip,” she says, laughing.

“He’ll see the kid one time and go into the full pop-pop mode, bet me.”

“You’re right. See you on Sunday for dinner. Did I tell you Nana’s moving in with us?”

“What? Of course,” I say in confusion.

“It’s technically your house, I just wanted to double-check.”

“Oh my God, get the fuck outta here, ma. I bought that house for you. You can move the entire defensive line of the Giants in and I wouldn’t care. It’s your damn house.”

Two years ago, I bought a brownstone two blocks from the apartment I grew up in, moved my family into it, and gave it to my parents. I pay all the taxes; they get to live worry-free and I don’t have to worry about them having to walk up and down all those stairs. It’s a win-win really.