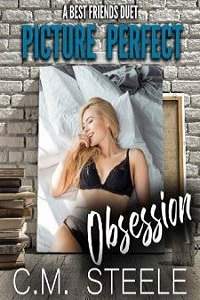 “Up! Up!” I hear her, but I’m trying not to listen as my roommate attempts to get me out of bed.

I’m so not looking forward to running a 5K, but that’s what Addison signed me up for. If she wasn’t my best friend, I’d tell her to shove it. It’s too damn early and still too damn cold for this. I give her my best scowl as she stands over my bed, demanding I wake my sleepy ass up.

“Stop making that face. It’s time to get ready.”

We’re both trying to make our way through college and be independent, but that’s an uphill battle when you live in a big city. At twenty, we both work our butts off doing temp work and going to school in the afternoon. We’re more than halfway through the semester, so it’ll be nice to have the summer off and only have to work.

“It’s not even light out,” I grumble, ducking my head under the covers.

She tugs them off. “It will be in five minutes. Move your ass. You run every day anyway.”

“It’s not the point. I hate crowds, the cold, and mornings…” I toss the blanket over my head again.

She kicks my bed and then bounces on the edge of the mattress, waking me up some more. Finally, I surrender. I’m such a pushover, I would have gotten up anyway, but I need to make her earn the torture she’s about to make me endure. “Get me coffee,” I growl out.

She jumps off and giggles. “Sniff,” she adds, walking toward the door. I do it and smell the fresh pot already brewed.

“You should have come in here with that bargaining chip then.”

“I didn’t know I was waking the grumpy troll this morning. Get up and get it yourself, lazy ass. We’ve got miles to run.” She walks out as I flip her off. Fucking hell, she’s probably already had three cups.

I grumble as I roll my ass out of bed. I showered last night, so I head to the bathroom to freshen up before she comes to hunt me down. Ten minutes later, I’m decked out from head to toe in magenta running gear with just a hint of grey on the sides. I tie up my hair in a ponytail with bobby pins to keep as many flyaways tucked in as possible. It’s only three-point two miles, but I still don’t want to come out looking a mess.

As soon as I step out of the room, she has her arm out with a hot cup of coffee. “Thank you.” I take a drink and sigh. It’s just what I needed. I have to have my fix every morning. It’s one of my only vices and chocolate of course.

“Anything for you, sleeping beauty. Now let’s get to it. We’ve got a race to win.”

“It’s not a real race. It’s a fun run.” I roll my eyes at her and snatch a banana off the counter to take with me. Slipping on my favorite running shoes, I’m starting to feel excited about beating my best time. It’s going to be very short either way because Addison and I run about a ten-minute mile—more or less.

“I’m ready.” I stand up and polish off my coffee before washing out the cup. I’m the neater one out of the two of us, so I wash her cup that’s already in the sink. It’s a habit I picked up as a kid. My parents both worked, so I learned to do the cooking and cleaning. We were happy, but we weren’t wealthy. Addison wasn’t that lucky. Her parents died two years ago in an accident.

“Give me five minutes.”

Whipping my head toward Addison, my eyes turn into saucers as I glare at her. She’s tying up her hair and walking back to her bedroom. I could kick her in her shins, but then she can’t run and will bite my head off for it. "What the hell? You rush me, but you're not ready?"

"Well, hello. I had to make sure you were up because if I didn't, then we'd never make it out of here. Besides, I'm just taking another tinkle. I'm not using those port-o-potties."

"The only thing I want to catch is a man," Addison hollers from the bathroom. I'm so grateful these apartments were meant for roommates. Sharing a bathroom is hard between two girls who work at the same time. We both have gigs down at the Merchandise Mart as temporary administrative assistants while we go to school online and occasionally at the school. This semester I have no actual in-class classes, which is nice. Addison, on the other hand, has all of hers at the campus. She’s not very pleased with it, but hey, I was in that same predicament last semester.