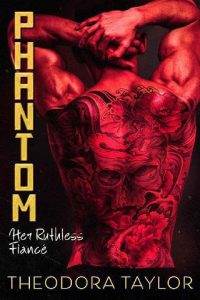 It was time to deal with the doctor who wouldn’t stop asking questions about Dawn.

A couple of weeks ago, Phantom’s cousin, Victor, had decided to install his ex-girlfriend Dawn into a prison disguised as a house in Rhode Island. Okay, fine. Phantom had a few questions about how this whole kidnap and imprison your ex-girlfriend thing would end. But this was his cousin, plus one of his literal partners in crime, so yeah, sure, he’d agreed to helped him blow up her life.

He’d not only snatched her from her college dorm room, but he’d also hacked into Dawn’s school account and sent the email himself that she was quitting the internship she landed at the Women with Disabilities Clinic in Manhattan before it even started.

“I changed my mind about taking the internship. Replace me with someone else.”

Blunt and clear. It hadn’t been nice, but it had done the job. After a few hours, Olivia had sent a polite but terse email back:

Thank you for letting us know you wouldn’t be joining us for the summer internship.

Though your message was brief and received only three days before you were due to start, I’ll assume this must have been a hard decision for you to make.

Fortunately, we have a long waiting list for this incredibly prestigious internship, and I’ve already filled your spot.

Best of luck with your future endeavors.

Great. She’d basically said that Dawn was an easily replaceable asshole in the politest possible way. That should have been the end of it.

But a few days later, the doctor appeared to have a change of heart. A new email popped up in Dawn’s inbox, which Phantom was still monitoring.

This is Olivia again. That last email didn’t sound like you.

I know we never received the chance to work together and get to know each other, but I’m here for you if you need me. And if you’re in any kind of trouble, I’d like to help. Just let me know.

Dammit. He supposed he should have known that a bourbon heiress who worked as a pregnant lady doctor at a clinic for women with disabilities wouldn’t be the cold-hearted type. Ah, well…

He deleted the message, figuring that would be the real end of it. But a few days later, a new email popped up in Dawn’s inbox.

Olivia again, I haven’t heard from you. I’ll keep on emailing until you answer one way or another. I’m not going to give up on you.

He’d heaved a huge sigh and typed back as Dawn: I’m fine.

They weren’t texting, but her reply had popped into Dawn’s inbox less than a minute later.

I don’t mean to be rude, Dawn, but you don’t sound fine. I’m a pretty good judge of character. And the woman I met wouldn’t have sent that first email. Or answered my two concerned emails with “I’m fine.”

That was when Phantom decided to pay her a visit. Obviously, some intimidation would be required to get the doctor to back off.

It had been an easy meeting to arrange. The clinic was understaffed, and though he wasn’t a woman with disabilities, it had been easy enough to slip past the over-worked front office clerk and walk down the hallway until he found the door with a Dr. Olivia Glendaver, MD plaque beside it.

Even better, she wasn’t there when he walked into the simple room, which housed only a desk, two guest chairs, and a bookshelf filled with medical texts. That meant he could use the good ol’ “Bad Guy Waiting In Your Office When You Walk In” intimidation routine.

While Phantom bided his time like the villain he was, he checked out the two framed pictures sitting on top of her desk. One was of an older trim man in a pastel suit flanked by a pair of thin blonds in equally bright dresses and large hats.

Their colorful outfits, along with the horses trotting around in the background, told Phantom that they must be attending the Kentucky Derby. The blonds looked alike with smiles frozen in place by Botox. But they weren’t twins.

One had much more triangular and feline features, a sure sign of some face lifting underneath all those fillers. The other just looked like she’d decided that her thirties was the exact right time to start cutting off access to her facial muscles. Mother and daughter, Phantom figured, and one of them had to be Dr. Olivia Glendaver. They both looked like former southern belles, born and bred.

The other photo featured a Ken Doll in a suit, leaning against a bar with a glass of whiskey in one hand. I-banker. Phantom might call Rhode Island home now, but he could still spot one a mile away after growing up in Queens. No matter their color or weight, they all somehow managed to look like entitled douches with their shellacked hair and fake smiles.