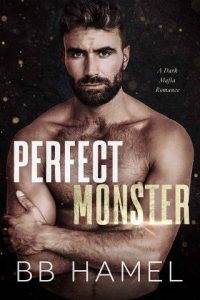 The red stain spread across his crisp white shirt in a wide bloom. I took a step back from the very large and very angry-looking man as he wiped at his chest and groaned. The glass lay shattered into pieces at his feet, sparkling like little diamonds.

That shirt probably cost more than three months of my rent, and the suit looked custom. The pinstripes matched up perfectly at the shoulders, each little detail fastidiously tailored and finished.

“You idiot girl,” he said, still trying to wipe the wine off with his palms, like that would work.

He was a wine-soaked gorilla.

I was tempted to suggest club soda. Or maybe I should just run.

Instead, I kept my mouth shut and kept still.

His date, a pretty brunette with striking lips, thick dark hair and eyebrows, and enough jewelry to make the Queen blush, rubbed his arm and gave me an apologetic smile.

The man shoved her away.

“Do you have any idea how much this cost, you stupid little bitch?” His eyes bugged out, and he stared at me like he was about to rip off my head and drink my blood like a demented Viking.

Which he might’ve, all things considered.

It was a very weird party.

Winter in Sea Isle, New Jersey, didn’t exactly get a ton of tourists, but when Jack, the manager at the Stone Harbor Club, called me up and said some big gathering was going down and offered me a catering job for the night, I had to say yes. Money was always tough to come by in the cold, lonely months.

Though, in retrospect, maybe staying home would’ve been a better idea.

The room was packed with men in expensive clothes and skinny girls draped on their arms like cotton candy. They mingled over drinks, laughing softly to each other, the room’s air was thick with danger and discontent.

I knew men like them. I had distinct childhood memories of men smoking cigars and talking at each other too loudly over poker games and football on TV, the room crackling with a sense of unease and latent violence. It’d been a long time since I’d last let myself get anywhere near men like these, but the rent was due and I liked eating, so I kept my head down and tried to power through.

The ballroom was set up like a wedding, with a dance floor and lots of round tables, but there was no music, and the gathered men seemed more like they’d rather blow lines of coke off a stripper’s ass and maybe kill someone than do the Electric Slide.

Couldn’t blame them. I hated the Electric Slide.

I had no clue what the occasion was supposed to be except that it celebrated a man named Roman and some new business venture he’d started, which sounded great, good for Roman. I wished him the best.

Only I really didn’t want this very large, very angry-looking Italian man to murder me in front of fifty people.

And based on their bored stares, I was pretty sure nobody would come to my rescue.

“I am so, so sorry,” I said, finding my voice at last. The guy’s date glared at him and crossed her thin arms over her curvy chest, saying nothing. I wasn’t getting any more help there, clearly.

“Sorry’s not good enough,” he said, voice dropping into a dangerous snarl. He’d be handsome, if it weren’t for the death glare.

In my defense, it was an accident. He’d been arguing with that girl about something when I walked past with a glass of red on a tray for one of the guests, and he turned abruptly and slammed into me.

Obviously, that didn’t matter now, but still, I was a decent waitress.

I’d only ever spilled drinks on, like, two other customers. Three, max.

“Club fucking soda? For wine on a two-thousand-dollar shirt? What the fuck is wrong with you?”

I really shouldn’t have mentioned club soda. I’d known it was a mistake and would only piss him off more. I just couldn’t help myself.

I held up my hands, pleading now. I didn’t want this to turn into a whole thing. I couldn’t afford to lose my job, especially not in the winter when I was barely making ends meet to begin with, and the idea of burning two grand for some rich guy’s shirt made me want to scream bloody murder into my pillow.

“I’ll make it right, sir, whatever you need.”

A dangerous gleam flashed in his eye. “Anything I want, pretty bitch?”

I stepped back from him, heart suddenly racing. The way he ran his tongue over his lower lip was both lascivious and threatening, and I wasn’t a fan of where this was going.

“I meant, financially. I can pay to have it dry cleaned—”

He reached for me, faster than I could follow. My tray clattered to the ground, and the other men didn’t even react, like they were used to seeing waitresses get assaulted.