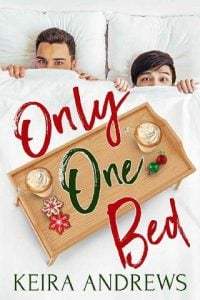 If my grandma wasn’t so cute, I’d tell her to bite me.

She beamed up at me with her crinkly grin, white hair peeking out from her red Team Canada toque. She wore her usual prim and proper outfit of slacks, blouse, and cardigan, her face fully made up—Yuko Tanaka did not leave the house without her rose-colored lipstick.

But every time we went to a skating competition, she proudly topped her outfit with the red woolen hat. I’m not especially tall, but she barely reached my shoulder, the hat’s pom-pom giving her a few extra inches.

Her elbow struck just below my ribs as she asked again, “Where’s your boyfriend?”

I rolled my eyes at her old joke as I stepped back to let a woman pass through the concessions line. This was a brand-new arena in the Calgary burbs built for the Olympics in fourteen months, but there still wasn’t enough room on the concourse. Never was. “You know Etienne’s not my boyfriend. He’s my best friend.”

I leaned down and repeated firmly, “You know Etienne’s not my boyfriend.”

“Why not?” Her brown eyes sparkled.

“Because I have a girlfriend. Obaachan, stop trolling.”

Fine, I used to have a girlfriend. Though Mandy had nothing to do with why Etienne wasn’t my boyfriend. I was straight. It was my older brother, Henry, who was gay. The end.

She hmphed. She loved this game of being unconvinced that Etienne and I weren’t secretly on the down low. “Why isn’t he here?” My grandma didn’t follow skating results unless Henry was involved.

“Etienne and Brianna didn’t make the Grand Prix Final. They’re not at that level, remember?” I quickly added, “They’re still having a great season! But only the top six teams from the Grand Prix events make it. They didn’t medal at either of their competitions this fall.”

They’d been fifteenth in ice dance at the last World Championships, which was amazing when you thought about it, but they weren’t medal contenders internationally. They never got the scores they deserved, but the judging was so political and fucked-up.

“Mmm.” Now her gaze turned critical. “What did you do to your beautiful hair?”

“Cut it.” It was shaved close at the back and sides and longer on top. I’d spiked up the front with gel.

“I’m not. No frankincense or myrrh on hand. Definitely no gold.” I elbowed her arm gently. “Get it?”

She snorted. “Very good, Samu.” She’d called me that for as long as I could remember.

“It’ll wash out.” I ran a hand over the tips of my hair that I’d highlighted a metallic silver-green in contrast to my natural near-black. “Eventually.”

The pom-pom danced as she shook her head. “Your cousin Keiji in Osaka just got a big promotion. No green hair.”

“Keiji’s a banker. I’m in third year sociology at UBC. No one cares about my hair.”

“No ripped pants either. You look like you’re poor.”

“There’s nothing wrong with being poor. It’s a social construct.” Although my jeans had not been cheap. “I know, I know, no baggy hoodies for Keiji either. Or Henry.” Between my perfect cousin and my uptight, extremely tidy brother, my grandma had a ton of comparison material. My mom said she’d done the same thing to her when she was growing up and to ignore it.

Hand snaking under my hoodie, she pinched my waist. She was still lightning fast. “You’re a good boy anyway.”

I lightly batted her pom-pom. “I love you too.”

We reached the front of the line and ordered hot dogs, fries, and pretzels. The menu here had a Wild West theme, but aside from the chuckwagon chili, it was all the usual crap. I was an expert in arena food, and while the content of hot dogs was questionable at best, the pizza was never fresh and suffered more from sitting under warmers.

Obaachan insisted on carrying the tray of pop, already sucking on her Orange Crush. “It’s Henry who really needs a boyfriend,” she said.

“Shh!” Juggling the tray of food, I squirted ketchup into little white paper cups at the condiment stand.

I glanced at the people milling around. Between fans, families, friends, coaches, and media, skating was a small world and gossip was a main food group. Henry was a former world champion fighting for gold in singles against his arch nemesis from the States, Theo Sullivan. Everyone here knew who Henry was, and he would not appreciate Obaachan discussing his love life—or lack of it—so loudly.

I mean, she wasn’t wrong—Henry needed a boyfriend. Or at least to get laid. Not that I knew for sure he wasn’t getting any. My big brother would discuss his real or nonexistent sex life with me right about never in a million years. I worried sometimes that he was lonely, but he was too obsessed with skating and beating Theo to date.

Etienne said he was too busy these days for a boyfriend too. I wasn’t a world class athlete, and while I had enough to do between classes and my job re-shelving books at the library, I wasn’t sure what my excuse was for not seeing anyone again since Mandy. It had only been a few months, though. I’d been happier playing League online with Etienne on weekends.