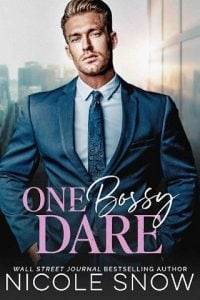 It was one little dare with razor-sharp teeth—work for him.

Yes, he's still offering me the job dreams are made of.

But Cole Lancaster is the stuff of bossy nightmares.

His precious daughter is the only reason he ever stops grumping for five seconds.

I'm sure I can deal with his scowls and cutting glances for one huge payday.

Only, sometimes your best assumptions are dead wrong.

Like the business trip to paradise that shows me a different Cole.

A man with a beating heart and a billion-dollar smile.

A master of soul-stealing kisses.

A mess of secrets that leave me reeling.

I wish my taste in men didn't match my coffee.

When I took the job, I didn't know the risks.

What if one crazy dare means falling in love?

Shut The Cup Up (Eliza)

Some people imagine their life has a soundtrack.

A background score of meaningful songs to pulse and highlight and push along every drama that touches their lives.

Not me. My life has always had a smell trailing it like sweet perfume, and I wouldn’t trade it for the world.

I never get down to business until I’m adrift in coffee-scented heaven.

“Thanks for letting me in early, Wayne. It’s easier to focus before you’re officially open.” I brush a thick strand of dark hair out of my eye.

“Anytime, Eliza. I’m a sucker for good company.” Wayne slides a steaming cup of Wired Cup’s latest brew across the counter, picks up a dish towel, and swipes it across the gleaming espresso machine.

Bringing the cup to my mouth, I slowly take a sip. This isn’t just chasing a caffeine high. Ever since I had my grandmother’s stovetop insta-coffee, this is my waking ritual.

“Dark roast.” I take another small sip, smacking my lips. “...with notes of cacao?”

“Close! It’s a Sumatran roast,” he tells me, scratching his thick beard.

“Heated at one eighty?”

He gives me a derisive look. Obviously, lady, what kind of newbie punk do you think I am? He doesn’t even have to say it for me to hear him thinking out loud.

When it comes to coffee, it takes one to know one.

I narrow my eyes at him anyway.

“Oh, you’re serious? Yes, all our drinks in this class are heated at one eighty. Company policy.”

“That’s what I thought. This is just...well, better than the usual. I can taste the layers. It’s pretty decent—” I pause, giving him an exaggerated shrug. “For a chain, anyway.”

Wayne throws his head back and barks a laugh.

“Coffee snob. I knew I kept you around for some reason.”

I smile. “I’m not. You know how open-minded I am. Good brews are like fingerprints—they give a time, a place, a memory. You never know where you’ll find yourself until that next cup. Magic.”

“Shit, lady, don’t put me on a pedestal. I’m no coffee wizard, just a guy making a living.” He starts organizing tall bottles of flavored syrups on the back counter.