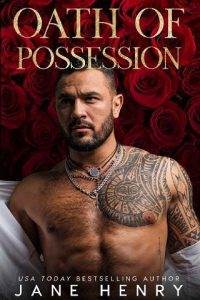 Of all the jobs I’ve been given as capo in the Rossi family… something tells me, this one’s gonna be my favorite.

I look in the rearview mirror at the furious, stunning redhead who looks as if she could tear me to pieces with her bare teeth, and give her a wink. I don’t give a fuck about the guy sitting next to her, who’s brooding like a pouty toddler, staring out at the hazy sketch of the Boston waterfront as it whizzes by the tinted window.

“Gonna ‘fess up now?” I ask congenially, tossing the offer to either of them that might take the bait. They won’t, though. Half wish I smoked so I could light one up just to add to the whole nonchalant vibe.

I shrug my shoulders. “Might be easier than when I’ve got you two suspended in chains in the family dungeon.”

“Fuck off,” she says in a half-whisper. She tries to hide the way her lips tremble, but I don’t miss it. I wonder what exactly she’s afraid of. She hasn’t seen a fraction of what I’m capable of, so I don’t know if there’s more she fears than me.

But she knows I haven’t made up the dungeon, and likely knows she’s absolutely heading there.

I don’t know much about Vivia Montavio except that she’s a Montavio—which is almost enough to know. Youngest sister of the Montavio brothers, cousin to my fellow mob brothers the Rossis. Sergio Montavio, the eldest surviving Montavio after the death of his brother Nicolo, mentioned he had a younger sister. He even went so far as to casually mention I might like to meet her someday, but that was a few years back. And leave it to the asshole not to tell me she was a fuckin’ knockout. I’ve only caught glimpses of her, but it was enough. I look forward to a more casual perusal, I smirk to myself.

Of course, she’s off-limits now that she’s a prisoner.

My phone rings just as I pull up the traffic on GPS.

Romeo. My Don, the leader of the Rossi family.

“You’re gridlocked from where you are to the tunnel, then it’s a fuckin’ parking lot until you practically get here. You’re looking at three hours minimum to get home.”

I curse under my breath. The typical drive’s only thirty to forty minutes without traffic but leave it to the Boston highway system to complicate shit.

“Got another plan, boss?” He don’t want me sitting in traffic with cuffed captives likely to cause a scene, not to mention we’d be like sitting ducks on the highway if anyone decided to pull something funny on us. I have no idea who these two were involved with.

“Yeah. Take them off the highway, someplace private. Keep them quiet, keep them covered. Let me know if you get even an inkling you’ve got a tail.”

I glance in my rearview mirrors, but with this traffic, it’s impossible to tell if we’ve been followed.

Mario, the youngest Rossi brother, and his woman Gloria helped me bag these two, and I expected they’d come as backup. Probably just as well if they didn’t, though. If it comes down to a high-speed chase, having two cars to keep safe is bullshit. This ain’t my first rodeo.

“No, I figured you could handle my spoiled little cousin and her henchman. Gave Mario and Gloria the night off.”

A warning bell dings in the dark recesses of my mind, but I ignore it. I don’t have much of a choice here. Got two prisoners I need to get to safety, a possible tail, and nothing short of a private jet to The Castle’s getting me outta here anytime soon. If I had just the girl, I wouldn’t even question nabbing a motorcycle from somewhere—hell, my brother-in-crime Mario’s got connections on every street corner. But with two of them, I’m shit out of luck.