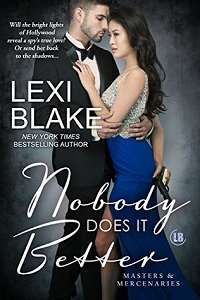 Kayla Summers walked into the gorgeous lobby and tried not to think about how badly her hands were shaking. To her right she could hear the sound of the ocean, most times a deep comfort to her, but today not even that rolling, endless symphony could soothe her.

Of course it wasn’t every day she did spy stuff. She’d trained for this day, long hard hours that would leave her wondering why the hell she’d signed up for this gig when she could be playing beer pong and rushing a sorority.

“Hey, it’s all right,” the man with the slow Southern accent said under his breath. He walked beside her, had been beside her from the moment she’d left DC. “This is nothing at all, Kay. We’re walking into the hotel, picking up your sister, and then you’ll walk one way with Mr. Bishop and I’ll walk the other with Kun. We’ll meet up at the extraction point and you’ll both be back in the States by this time tomorrow.”

“Are you going to arrest her?” She’d been wondering about that, wondering if this whole save-the-twin-I-didn’t-know-I-had plan was truly about sending her long-lost sister to Guantanamo Bay. Though with some of the stories she’d heard about MSS, China’s version of the CIA, being tortured in Cuba might be a fun vacay for her sis.

Sister. She had a sister. Jiang Kun.

Thank god her fathers had insisted she know something of the culture she’d been born into. One of her dad’s taught Mandarin at UC Santa Barbara and she’d grown up speaking it around the house. His Cantonese was excellent as well. Despite the fact that there was not a drop of DNA between them, they always joked that she’d gotten Dad’s ear for languages.

If only her sister had been as fortunate.

Tennessee Smith stopped in the middle of the elegant hotel lobby, his long, lean frame looking down on her. “I told you. Once your sister is in the States, she’ll be debriefed. That debrief will likely last a good long time, but she’s going to be treated as an asset, not an enemy. Jiang Kun was accepted into a program to train MSS operatives when she was sixteen years old. And by accepted, I mean she was selected by the government and there was no way to say no. You know that training you’ve done over the last few months? That was a tiny taste of what your sister has been through the last several years. And I assure you, the CIA is kinder with our agents than MSS.”

After she’d been contacted by the Agency, she’d spent three months in a program meant to give her basic training. What she really thought they’d wanted to do was maintain control over all communications with her sister.

Still, it had been a rough couple of months. Physical training. Firearms training. Learning the ins and outs of procedure, and all for one operation. This one.

The funny thing was, while it had been rough, she’d kind of liked it. She’d liked having purpose. Despite the fact the she was flying through her undergraduate degree at Stanford, she often felt aimless. The last few months had been a revelation. Something had come over her. A sense of true purpose.

What the hell was she going to do when this was over? She’d gotten used to being around Ten and even the super-cold dude. John Bishop. She’d made him smile once. All the other recruits in her class had gotten together and made her a trophy for that because the guy wasn’t known for his humor.

Still, he’d taken an interest in her and she would oddly miss him.

“I’m just worried about her.” And worried that once Kun was in the US, she wouldn’t need Kayla anymore.

Would they even have a relationship? Or would her sister disappear into the Agency while the Agency said “thanks and see ya later” to Kayla?

She thought briefly about the mother who’d given birth to her. How hard had it been? She’d known she was having twins, known given China’s one child policy at the time that one of them would be taken or aborted. Everything she’d done had been in secrecy and she’d managed to have Kayla smuggled out of the country. By some grace, she’d wound up in an orphanage that dealt with foreign adoptions, and by the time she was six months old, she was the darling daughter of Fred Summers and Jim Gayle.

According to her sister, their mother had passed away a few months after Kun had gone into training.

Ten put a hand on her shoulder. “Don’t be worried about her. She’s made a great decision and she’s going to be rewarded for it. And honestly, if you want to stay in training to be close to her, I’ll approve it.”

“Seriously?” She wasn’t going to say it, but she’d been upset at the thought of not going back to those classes.