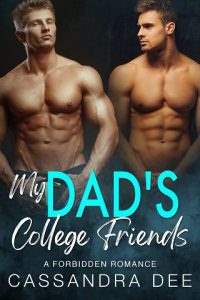 While taking out the ingredients to make Mama’s famous fudgy brownies, I smile. I imagine how my boyfriend Roger’s eyes will light up when he sees the unexpected treat. He loves Mama’s brownies as much as I do, and has asked me to make them for him dozens of times. Of course, it makes me happy to be able to share something precious with the person who’s captured my heart. I’d like to think Mama would want nothing else as well, but who knows? She ran out on me and Daddy ages ago, so it’s not like I can ask her.

As I whip up the fudgy batter, I think of Roger’s “prom-posal” last week. It was the sweetest thing I had ever experienced. From the roses to the ring box containing our prom tickets, I was blown away by the fact that he made it so special for me. And to ask me in front of our classmates showed how much he really cares for me. Overjoyed with our upcoming night together, I’ve already purchased my dress for the event. It’s a pretty cream color with a sexy strap over one shoulder and rosettes at the waist. I just hope Roger loves it as much as I do.

I know that he wants to take our relationship to the next level, especially now that we’re both adults. I’ve been dragging my feet because I didn’t think I was ready, but maybe prom night is the perfect time to go all the way with Roger. After a year of dating, I think he’s waited long enough. And although I still don’t understand why he’s with me, I finally believe that he really cares about me. After all, Roger could have any number of sexy and thin blondes, but he chose me, a curvy brunette with generous assets.

Now, I can feel it’s the right time to shatter the glass ceiling. It’s not like I’m a virgin or anything, after all. But ever since that one stupid night with Casey Putnam, who sold me a sweet bag of lies, I’ve been hesitant to take that step with anyone else.

Popping the brownies into the oven, I begin looking for the perfect container to box up the goodies once they come out of the oven. Finding the perfect container seems to take forever, given that we have about a million different Tupperware boxes, but no matching lids. I continue my search though, because Roger is worth it. I’m not going to bring over brownies smooshed in a ziplock bag. He’s my one and only, so he deserves the effort.

Then again, even after a year, I’m still worried about coming off as desperate and needy. I mean who could blame me? Roger is perfect and popular with his wavy blonde hair and blue eyes. So basically, he’s a tall and handsome Ken doll, while I’m nothing like Barbie. I definitely don’t have the tall and beautiful gene in my genetic makeup. Now if there were a short and round gene, that one I have in spades. I’m that girl people always say, ‘You’d be so cute if you just lost a little weight’ or my favorite: ‘You have such a pretty face.’ WTF? Like I don’t know that means you think the rest of me is not so pretty. Either way, Roger Money chose me, a fact that I’m grateful for every day.

Plus, this last year has been hard for Roger. His mom started dating someone seriously, and it was a shock to my boyfriend. He’s close to his mother, but I guess the reality of your parent getting serious isn’t something that you can ever really “prepare” for. But I’m proud of how he’s worked through his feelings to build a relationship with the new guy in his mom’s life. At first, Roger had been hesitant about even spending time with Mitch, but he eventually chose to do it for his mom. Now, Mitch and Marilyn are engaged, and Roger has even become close with Mitch’s daughter, Carmen. I’m so impressed by my boyfriend’s ability to put his mother’s happiness first, and it’s just one of the many reasons why I love him.

Taking the brownies out of the oven, I inhale the sweet, fudgy smell filling the kitchen. As much as I would love to take a quick bite, I decide to wait because Roger is going to love these. Being a popular football player isn’t all fun and games. There are a lot of annoying people to deal with, from assistant coaches to the booster squad. But these brownies are a simple way to show him how much I love him. Seeing that it’s Tuesday, he should be getting off practice any minute now, so the brownies will be a perfect way to lift his spirits after what I’m sure was a grueling work-out. Coach sure knows how to run those boys ragged.