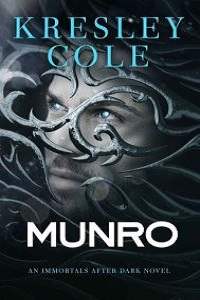 Dungeon of the Disremembered, Quondam

The cracking sound of Munro’s bones echoed in the cell as his friend’s fist delivered another blow.

Brain rattling inside his skull, Munro bit back a growl. He’d long since stopped trying to reach Madadh, the legendary Mad Dog of the Highlands. The warlocks had vassaled the male with an obedience spell; Madadh’s wolven inner beast was fully risen, his Lykae blue gaze vacant.

A mindless slave for the Forgotten to use.

And they wanted to do the same to Munro. He narrowed his eyes at the robed archwarlock controlling Madadh—Jels the Conniver. The male’s pasty face was sunken, his bald pate reflecting the cell’s torchlight.

Munro could break his spindly frame so easily, but he was in no position to attack—on his knees, his manacled wrists connected to a chain that descended from the ceiling. Magic reinforced all the metal, making it indestructible even to one like him.

Thoughts were foggy, but he held on to one critical fact he’d learned: the Forgotten couldn’t vassal a Lykae unless he or she unleashed their inner beast. Yet the warlocks had no magical means to summon the creature forth. “Give it up, Jels,” Munro bit out. “No torture will make me loose my beast. Nothing can.”

When a Lykae experienced more pain than he or she could handle, the beast would rise up to take it. Even mental anguish. But Munro would never succumb. Having lived with his twin brother’s volatile beast for centuries, Munro had developed absolute control over his own.

Jels only smiled. “If you’re betting on a rescue, don’t. The Vertas army already assembled outside of our realm’s sphere to free you and your men, but our new ally forbade a raid, so the alliance left you behind. No one cares about you enough to anger our ally. Not even your brother.”

Who the hell was this ally? “My twin would never abandon me.” Will would be prowling for Munro’s freedom. “Sell that shite somewhere else.”

Madadh’s punch took Munro across the jaw, nearly dislocating it. His head snapped around, blood spraying the hem of Jels’s purple robe. “Godsdamn it, Madadh!”

His friend’s scarred face was blank, the mad dog now a subservient dog.

Jels tilted his head at Munro. “Why do you resist our thrall? I never expected it to take this long.”

“I’ve been a warrior for nine hundred years . . . have known torture many times before. You waste your time.”

As if Munro hadn’t spoken, Jels said, “The process is simple. Once you release your beast, I will recite an incantation to mystically leash it. You’ll still be aware of everything around you, but unable to physically react or refuse a warlock’s order. After a while, your consciousness learns not to care about anything. All that will be left is blissful obedience.”

Munro spat more blood. “In other words: hell. Why no’ just kill me?”

“Kill?” Jels blinked his beady eyes. “The purpose of this trap was to secure a Lykae elder like you. We were delighted to learn that you planned an incursion against us.”

Munro had heard that the Forgotten were creating new Lykae from humans and then controlling those rabid newlings with magic. So he’d gathered seven of his most seasoned warlairds for a mission to abduct the archwarlock for intel and leverage.

Jels could not have looked prouder of himself as he said, “Yes, we promptly dispatched the nymph Ariza to guide you into Quondam through a ‘vulnerability’”—he made air quotes with bony fingers—“in our boundary.”

As soon as Munro and his men had squeezed through that rift, they’d been as good as captured. Madadh had released his beast, falling under the Forgotten’s control. The warlocks had then used the massive Lykae to attack the rest of Munro’s crew.

Caught off guard, each warlaird had unleashed his own beast—and been vassaled, one after another. All but Munro, who’d been searching for any alternative. As usual.

He’d known Ariza for years. Why would she betray him? Whatever she’d hoped to gain had been for naught; the warlocks had seized her as well. “A lot of trouble,” he told Jels. “Why do you want a Lykae elder so bad?”

“Your beast is an incredibly powerful alpha. We could have searched a thousand planes and dozens of eras for a beast so strong as yours.”

Eras. Some said that the warlocks had a gateway that allowed them to move through time. Munro had researched theories of time travel, hoping he could use that gateway to save his long-dead parents—anything to alleviate Will’s guilt over their deaths.

Anything to rescue his suicidal twin.

Munro had learned that history could never be changed, but beings could be brought forward. If one had access to a mystical gateway . . .

Jels continued, “Your bite will seed legions of newling slaves for us.”

They wanted Munro to turn humans? Condemning innocent mortals to decades of rabid insanity—or death? The perversion of it! “The next bite I make will snatch clean your throat. I swear that somehow, someway I will seize the upper hand with you. By all the gods, you’ll regret ever crossing my path.”