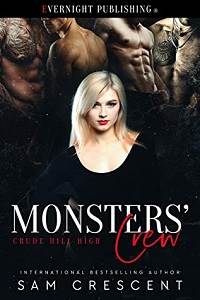 I thought about death a lot. It wasn’t morbid or for some quest to finally find the end. At eighteen years old, I hadn’t really lived. There had to be more to life than this empty shell of nothing. Life seemed to be playing out, and the longer I was part of it, the less I seemed to be relevant. I didn’t fit in. I wasn’t part of any crowd. To most, I was a loser. I didn’t mind. It helped me to dwell in my thoughts of death. For all I knew, a lot of kids thought of dying. About how their final moments on this very earth were going to go.

Glancing around the cafeteria, I couldn’t help but wonder if that wasn’t a whole crock of shit. The pretty girls. All with their long hair, styled pretty much the same, but there was always one girl who liked to change it up. For the team here, it was Nancy. She ran with the pack but the truth was, she danced above them all.

Then, of course, around them were the jocks. The football crew who believed they ruled the entire school, but the truth was they weren’t in charge, not really. I’d firsthand seen them really bowing down to one group of people, and they sat in the corner. No one messed with them.

Monsters’ Crew or the Monsters’ Boys. Depending on who you spoke to. Caleb Falls, River Block, Gael Parson, and finally, Vadik Keller. All of them deadly. No one crossed them. Even now as I glanced at them, I saw River with a knife between his fingers. He flicked the blade back and forth as if it was nothing more than a pencil. I’d seen him do this many times and yes, he’d even nicked himself, but he’d often just lick it up or wipe the blood away on his pants.

They were all scary as fuck. Caleb, their leader, made all the decisions. He always took the helm and the other three surrounded him, protecting him. Black hair, blue eyes, and he never smiled. It was odd to think about. He never laughed. When he found a target, he’d get this weird look on his face that vaguely resembled a smile, but it never was.

Taking a large bite of my burger, I averted my gaze as Caleb looked right at me. The last thing I wanted to do was to catch their attention. Everyone knew what happened if you caught their attention.

The girls loved it. I’d heard the rumors of the boys tag-teaming girls and then discarding them. A couple had left the school as they spent way too much time sobbing about the fact they couldn’t win one of them over. They were Monsters and were more than happy to wear the label as well.

Out of some of the guys who wished to join them, a couple of them had never been seen or heard from again. To the outside world, this was a prestigious school. Wealthy kids came here. All of the Monsters came from money. They were all filthy rich, but no one here was from the squeaky-clean kind of group. Nope.

My parents dealt in sordid deals and blackmail. They owned an entire city, and I’d even caught conversations about trafficking. There had been a lot of young women coming in and out of their house. Most of them covered in bruises.

There was nothing I could do about it. This school was the one place where I could breathe without worrying someone was watching. Of course, they were watching. Even the jocks, they came from backgrounds that had a double-edged sword.

I grew up surrounded by competition and the enemy.

Slurping up my banana milkshake, I jumped, nearly choking on the straw at the sound of a loud clattering.

Near the Monsters’ table stood a kid I didn’t recognize. He was clearly a year, or several years, below us.

River got to his feet and the tension in the room mounted. Silence fell.

“Please, no, please.” The boy’s whimpering filled the air.

The biggest mistake he could make.

In hell, no one ever showed weakness. We were all monsters, all destined for lives we didn’t want. At the top of the tree stood the four Monsters, and we were nothing but their minions. I hated it.

River slammed the kid to the table. The blade pressed against the boy’s throat.

“You think it’s funny to throw a spitball?” River asked.

See? All of this over a wayward spitball that had come at the beginning of the school day.

Nibbling on my lip, I watched as the boy held his hands up in surrender. He was in the wrong place and was about to become target number one in a sea of sharks. I’d seen enough as River landed the first blow. As if on cue, Caleb, Gael, and Vadik got to their feet, and away they went. Anyone who dared to step up would feel his wrath.