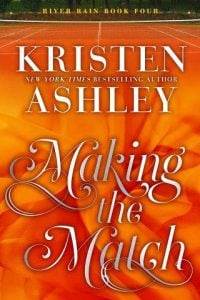 Decades ago, tennis superstar Tom Pierce and “It Girl” Mika Stowe met at a party.

Mika fell in love. Tom was already in love with his wife. As badly as Tom wanted Mika as a friend, Mika knew it would hurt too much to be attracted to this amazing man and never be able to have him.

They parted ways for what they thought would be forever, only to reconnect just once, when unspeakable tragedy darkens Mika’s life.

A time comes when they’re both unattached.

But now Tom has made a terrible mistake. A mistake so damaging to the ones he loves, he feels he’ll never be redeemed.

Mika has never forgotten how far and how fast she fell when she met him, but Tom’s transgression is holding her distant from reaching out.

There are matchmakers in their midst, however.

And when the plot has been unleashed to make that match, Tom and Mika are thrown into an international intrigue that pits them against a Goliath of the sports industry.

Now they face a massive battle at the same time they’re navigating friendship, attraction, love, family, grief, redemption, two very different lives lived on two opposite sides of a continent and a box full of kittens

But when he knocked, the door opened, and one of the groomsmen looked at him, then glanced over his shoulder, he heard the familiar deep voice call, “Let him in.”

Corey entered and saw immediately that the groom had prepared for Corey’s visit.

As, of course, he would.

He was not stupid.

Corey knew he’d prepared because, with a nod and a look, but not a word, all the groomsmen filed out.

Corey did not see joyous-wedding-day expressions on their faces when each man caught his eye as he left the room.

That wasn’t about them having any apprehension about what was to happen that day or the woman their friend was about to tie the rest of his life to.

It was because they all detested Corey and perhaps knew why he was there.

Or they thought they did.

His face void of expression, Corey met every eye.

He was used to this, especially with the male gender. Men never knew what to do when another man was in their orbit who was smarter than them in a way they’d never equal him— and worse for them, richer just the same.

Especially ones with huge egos like these men had.

And on that thought, the door closed behind the last and Corey turned to Tom Pierce.

Another annoying thing about Tom Pierce?

Not only was he the most talented tennis player on the planet—a player who turned that wit and intelligence against opponents so that he not only prevailed through physical prowess, he outthought them.

(As an aside, this was, to Corey’s way of thinking, worse than someone humiliating you after serving an ace, then doing it again, and again, and then again, something Pierce did often—his serve was, as one of his rivals put it, like trying to return a bullet.)

He was also one of the most handsome men on the planet.

He was not built like a tennis player. He was built like a football player, his tall body packed with power. This being what made his serve so terrifying, not to mention his return.

The first time Corey heard his name was overhearing office talk. Someone’s assistant was talking about “that tennis guy, Pierce,” who “looks like JFK, Jr., but more handsome.”

When Corey saw a photo of him, he noted she was not wrong.

When Genny phoned him and said, “Corey, I think I’ve met the man I’m going to marry,” and that man was Tom Pierce, Corey’s heart cracked in two.

Last, when Corey had met Tom, he knew what Genny knew.

She would never truly be his.

But Pierce would always be hers.

And he’d be happy with that.

As to the matter at hand…

“You would not be the first to break her, or the best,” Corey jibed.

Pierce, damn the man, didn’t give him anything. Not a sneer, a flinch, or even an eye twitch, his ability to hold his own against Corey was something else he didn’t like about the guy.

At that, Pierce spoke.

“Let’s not pretend that’s what you’re angling for.”

“And what am I angling for?” Corey pushed.

It was a mistake.

His first for so long, he didn’t realize it, not then.

“You hope this will crash and burn, like she and Holloway crashed and burned, because you hope she’ll eventually give up on men she actually wants and settle for one she doesn’t want, but he wants her.”