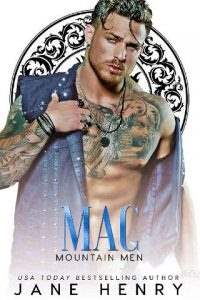 I walk into the meeting fucking prepared.

I know everything about her.

I know her height, her weight, and the fact that she’s got two little dimples on either side of her mouth, freckles she covers with makeup, and when she’s nervous, she clears her throat and blinks rapidly. She listens to jazz and rock music, depending on her mood. She designs and sews her own clothing and has done so since she was young, reads historical romance in her downtime, and she hates her bloody father.

That makes two of us, then.

The youngest child of the Aitkens family, she’s been somewhat spoiled but starved for affection.

I’ll keep that in mind.

I swipe my mobile off, hiding her social media accounts I’ve been monitoring now for months, and head into the office for our meeting.

“Mac.” Leith’s sitting at the desk when I enter, sipping a cup of tea.

“Y’alright, lads?” I ask, greeting the men of the Clan as I lean across his desk and push the window open higher.

Leith scowls at me. “We need privacy, Mac, what the hell are you doing?”

I can’t help but smirk at him. My older brother’s a bit of a tight-arse.

I stick my head out the window.

“Not a bloody soul from here to the road to Inverness, Leith. Don’t know how anyone’d hear a single thing. And Jesus, I’m bloody sick of not having some fresh air in here. Feels good.”

I’d make damn sure no one’s heard us. I have a plan to put into action, details I’m about to discuss with my brothers that no one can hear.

But a little fresh air won’t threaten that.

He huffs out a breath, and just to placate him, I draw down the window a few centimeters.

He rolls his eyes and scrubs a hand through his hair. The overhead lighting glints on the gold ring on his finger. Who’d have thought Leith would be married? He’s so much of a loner, I half expected him to be the family’s perpetual bachelor.

Seems that role, however, has been reserved for me. Maybe Tate. But definitely me.

“We need to talk about the Aitkens girl,” I say to Leith, and Tate’s eyes swivel to mine.

“You remember our plan last year, for me to make a move on Aitkens for what he’s done—”

A sharp knock sounds at the door. Leith sits up straighter and raises his voice.

The door flies open, and our younger sister Islan walks in.

“Hello there, boys,” she says with a smile.

Has she heard any of our conversation? Bloody hell.

I can tell already she’s got something up her sleeve by the look she’s giving Leith. Islan’s not one to interrupt a quarterly meeting with pleasantries, so I suspect she’s trying to butter him up. He’s ridiculously dedicated to safety, so she rarely asks for much. Every once in a while, though…

“What is it, Islan?” Leith asks. She’s recently turned twenty years old, though she’s acted like she was going on her twenties for the past few years. Tall and willowy, she’s got our mum’s high cheekbones and vivid, mischievous blue eyes. Unlike Mum, though, she’s still unafraid of the ways of the world, still enamored by what the world has to offer her.

“Was just thinking, Leith,” she says in a sickly sweet voice. “I heard that Mac and the boys were heading to Paris on one of your little mission trips.”

How the bloody hell did she hear that? It’s a good reminder that nothing we’ve said is really private, not when we’ve got sisters that listen in on every damn thing.

“How’d you hear that?” I ask, fixing her with a stern look. She only looks abashed for a fraction of a second before she flashes me a grin.

I growl at her, shaking my head. “It’s none of your business, Islan.”

She holds her head up higher with an air of superiority. “What is and is not my business isn’t your business, Mac.” She turns back to Leith. “So. Paris.”

A muscle ticks in Leith’s jaw, and I can’t tell if it’s because she’s called one of the biggest potential moneymakers of our lives our “little mission trip” or because he knows where she’s going with this. I lean back in my chair and watch what’s sure to be a bloody good fireworks show.

“And I was wondering if you'd let me and the girls tag along with you,” she finishes. She bats her eyelashes so innocently, I half-wonder for a minute if he’ll cave.

“Is that all?” he asks. I watch her eyes light up with false hope. There’s no way he’ll allow the girls to travel with us, especially because one of them will most certainly be his wife Cairstina.

“Aye,” she says. “That’s all. I know that Paisley’s been dying to get to Paris, and you know I’ve never been. It’s such a shame, so close to us, yet so far away…”