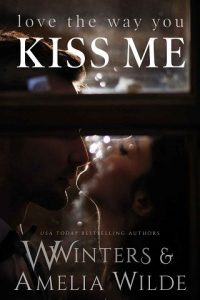 Turn Down for What - DJ Snake and Lil Jon

Are You with Me - nilu

Scars To Your Beautiful - Alessia Cara

My mother used to say, “If you can’t stop thinking about someone, it’s because they can’t stop thinking about you either.” It bears noting, though, that my mother was a fucking lunatic. She stalked a man and killed his wife because she was in love with him. Having no idea, he married her and shortly she became pregnant with me. It wasn’t until years later that he discovered the truth.

I was only seven years old when the trial was broadcast.

Cameras rolled and my sadness was caught on film. With interview after interview, journalists said the nation was entranced. As my fairy-tale life fell apart, what was left of me went viral. Every household knew my name, and the public begged for more. More of my twisted life; born into wealth and power, yet the daughter of a murderer. More of who I was.

My first kiss was photographed and the images sold to every major tabloid.

The first time I had sex, the world knew immediately after.

I talked about it with everyone.

I didn’t know any better.

It’s simply the way it was after my life imploded. I lived for sharing everything about my life with my followers, and they loved me for it.

I made my own happily ever after, and then it was ripped away.

In a single moment, my life changed forever.

I broke. There was nothing left after I’d loved and lost.

And then he came into my life in a way no one else ever had.

He was my protector, my therapy; he became my everything.

It’s a dangerous situation for so many reasons.

I’m starting to believe the things my mother used to say … which scares me because I know I’ve already broken down and lost everything once.

When he tells me it’s going to be all right …

The Firm is an elite, full-service private security company for high-profile clients and those who require the utmost discretion. Please inquire directly for assistance with booking. All sensitive matters will be handled with complete confidentiality.

There are two things I can’t stand for anyone to be when they enter a courtroom: late or rattled.

Being late never looks good, but people get lax about it. They tend to brush it off. What’s a few minutes in the grand scheme of things? Could be nothing.

As for being rattled—there’s no place for emotion in a courtroom, not from my position. Calm, logical … even ruthlessly cold is far preferred over rattled. Being focused is a personal rule of mine no matter what a judge says or what some lawyer pulls out of his back pocket. Not coincidentally, steady focus is also the number one rule in my profession. When we’re with clients this directive is absolute.

I don’t slip up when it comes to this charge. There are other areas of my life that require strict focus. The last time I slipped up, there were consequences.

I was late. I was rattled.

Today, hurrying up the wide stone steps at the county courthouse, I’m both late and rattled, which only serves to piss me off even more. The bitter autumn wind bites against the exposed skin on my neck as I grind my teeth and pull open the heavy floor-to-ceiling door after rushing up the marble stairs. I hustle as quickly as I can to make up for lost time, while still keeping my pace and gait professional.

The entire time I scold myself, adding anger on top of annoyance.

And it gets worse. The hearing today is an important one for The Firm. It’s the most important hearing we’ve ever attended, according to my brother Cade.

I rush through the metal detector and snatch back my phone on the other side. The brightened screen’s full of messages from my older brother. Cade owns the company; among other businesses, he created The Firm. He took on the responsibility of having the final say in which clients we take on, which is a hell of a lot harder than leaving it up to the group. He wants to know where the hell I am. With a steadying exhale I shake off everything from earlier this morning; namely, the hell of the phone call that lasted far too long. Rounding the corner and making my way to the elevator, I ignore the buzzing of my phone in my suit jacket pocket.

One last pause outside the courtroom doors to correct myself. I’m not taking the news from the phone call, and the memories that come with it, into work with me. I can’t. That cursed entity needs to go back in the locked box where it lives most of the time. Calm focus. Eyes on the client. Don’t fuck it up.