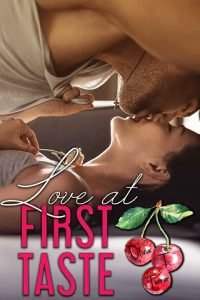 “I don’t know what you boys have been doing up here,” Brooke says with a wide grin on her lips as she walks into the conference room with two huge brown bags of take-out under her arms, “but keep doing it!”

We all laugh as she lays the take-out on the huge table. As always, it’s a fight for the Sesame Beef and General Tao Chicken.

Eli elbows me as I grab the box of Breaded Shrimp. “Don’t eat all of that!” he snaps.

“What are you going to do about it?” I say as I open the box and shove three of them into my mouth, never taking my eyes off him. We all inherited the big muscular gene from our father, but I’m the biggest Cline brother in the room. Eli is the smallest, but for some reason, he’s always picking fights with me. I think he likes to get beaten up.

“Let’s eat before you guys start wrestling on the table again,” Westin says as he lays out his napkin on the table and carefully places his chopsticks down.

“Seriously, boys,” Brooke says as she sits at the head of the table and puts her feet up. She’s playing with her black hair as she watches us massacre the food. “That was quite the dividend check.”

My three brothers and I own and operate Cline Investments, Real Estate, & Holdings, or Cline Corp for short. Our younger sister Brooke owns a fifth of the company but her heart is in another arena. She’s an actress and only collects the checks. The checks that have been significantly larger lately.

“Your big brothers are money-making machines,” Nolan says before sucking up a thick noodle.

Brooke is shaking her head, staring at us in disbelief. “Dad would be so proud of you guys.”

“Nah,” Eli says, but he’s looking down at the table getting misty-eyed.

“He would have been,” Brooke continues. “You took the company he started on top of the washing machine in our garage and look at what you’ve built.”

“And we’re just getting started,” Westin says with that killer look in his eye. He’s always been the one to push the rest of us whenever we’re lagging. He’s a hard ass, but we wouldn’t be here if it wasn’t for him.

Sometimes, I wonder if that would have been a good thing. I’m not suited to city life like the rest of my siblings are. Eli loves flying around the East Village in his Ferrari, Nolan is in heaven doing laps in his pool over his penthouse suite, Westin loves being in Manhattan which he calls the financial center of the universe, and Brooke, well Brooke is in her natural habitat with New York’s elite, promenading from a fashion show to an exclusive art gallery opening to the latest trendiest club in Soho, usually all in the same night.

I’ve been here for years and I’m starting to realize it’s just not for me. Too much concrete and too many people. I like being in nature. Trees, sand, rocks, mountains, lakes, oceans, anything that wasn’t manmade. That’s where I want to be.

I work a lot, which keeps me busy, but whenever I do get out to a club or bar, I have a hard time finding anything in common with Manhattan girls. Sometimes, I feel like I’m in the wrong place and am just trying to fake it to fit in.

I’m thirty years old and I don’t know how much longer I can do it.

“We’re going to start analyzing new markets,” Westin says as I grab a couple of spring rolls. “It’s time to expand Cline Corp larger than Dad ever dreamed it would be.”

“I doubt he thought it would get this big,” Brooke says as she looks out the window at the spectacular view of New York City at night. We’re on the top floor of a Manhattan skyscraper and the city looks beautiful with the lights shining in autumn.

“Remember the first order form he filled out?” Nolan says and we all laugh. “His writing was all shaky from filling it out on the dryer while Mom did the laundry.”

We all smile as we reminisce about the good old days. That order form is framed in the lobby of our office, but we’re so busy all the time that it’s probably been years since any of us stopped to look at it.

“Let’s get to the agenda,” Westin says as he wipes his hand on a napkin and opens his laptop.

“I thought this was a family dinner,” Brooke says as she grabs a spring roll and picks at it.

“It is nine o’clock on a Thursday,” Nolan says as he shakes his head.

Westin ignores all of us. “So, as we all know, unfortunately, Mr. Brown died last month.”