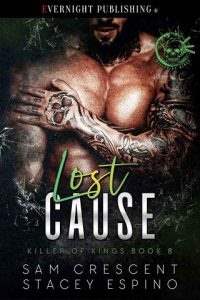 Priest lifted the edge of his sleeve and checked his watch. Things were about to go down in four minutes and seventeen seconds. His jobs were meticulous. He’d been staking out this hotel for the past six days, and today he’d get the job done.

Boss had strict instructions for this hit.

He expected Priest to make an example of Marcus Olivieri, to send a message to the rest of the mafia family not to conduct business in their city. They were into human trafficking and prostitution rings, and Boss wouldn’t tolerate it. Neither would Priest.

His legs were cramping up from his crouched position, but he had the perfect vantage point to see the asshole getting off the elevator. He checked the sights on his 9mm, loving the feel of the cool metal in his palm. Priest could still remember the first day he held one, nineteen years ago. The weeks following had been a blur.

He was a different person today than he’d been all those years ago.

Keeping his mind in the present was the only way to ensure his sanity.

One minute and thirty-three seconds.

This contract was going smoothly. Too smoothly. As soon as the fucking maid began pushing her cleaning cart down the hallway, Priest checked his watch again.

Any second and his target would be stepping off the elevator with the barely seventeen-year-old girl he planned to force into their prostitution ring. He’d fuck her, beat her close to death, pump her full of drugs, and then send her to their whorehouse for grooming.

As soon as the maid swiped her keycard on the room where he planned to carry out this hit, he ground his teeth down hard, his mind going through all the possible scenarios. He didn’t want an innocent to get killed on his watch, but that bitch had some bad timing.

The elevator door opened with a ding, and an obscenely drunk young woman stumbled out, attempting to hang off his target. She giggled as he led her to his hotel room. Why was the maid in the room? The room had already been rented and pre-paid for two weeks. It had been cleaned at 9:44 that morning, so there was no fucking reason for the maid to be there. The maid assigned to this end of the floor tonight wasn’t even a blonde.

Once he heard the door close, he stood up and kept tight to the wall as he moved in closer to room number 4423. He kicked open the door as planned, his pistol in his outstretched hand. Priest scanned the room. The girl was already crashed on the bed, the bastard unbuckling his belt. The man froze in place with the red dot dead centered on his forehead. Where the fuck was the maid? He’d watched her come into the room, and her cart was still just outside in the hallway.

Whatever. This contract needed to be finished or Boss would be on his case tonight.

Marcus shrugged nonchalantly, so Priest brought him down to size with a bullet to the kneecap. His screams were much louder than the shot with his silencer securely in place.

“Shut the fuck up.” He moved in close and stripped him of all his weapons and his cell phone. “Take off your clothes.”

He kept his gun in his target’s direction as he did a rough search of the luxury room. Marcus wasn’t going anywhere, too busy bleeding on the carpet. Where was the maid? He couldn’t leave a witness behind. Killer of Kings demanded every hit be clean. And he wouldn’t let Boss down, not after he’d saved Priest from self-destruction almost a decade ago.

She was nowhere to be found. He even checked under the bed.

Priest returned to Marcus Olivieri. He was in his underwear, not looking too suave now with snot leaking down his face. The man whimpered and begged for his life like a little bitch, but he wasn’t leaving this room alive regardless.

“Underwear too. Then get on the bed.”

The girl had passed out. Priest grabbed her by the ankle and yanked her unceremoniously off the bed. She barely came to. He reached down to the ground and pulled her up to her feet by the back of her hair. “Go home to your mother. Understand? Stop drinking. Don’t talk to fucking strangers.”

She nodded repeatedly. He opened the room door and shoved her out into the hall where she fell to her knees. Then he tossed a wad of bills from his pocket onto the carpet outside. “Go home!”

Once alone in the room with Marcus again, he went to work, slitting the man’s throat to shut him up. Priest held his palm to Marcus’s chest to keep him from thrashing as the blood drained from his body. Then he reached down and cut off his balls in one clean stroke, shoving them into Marcus’s mouth. When his men found him, one of their high-ranking soldiers, it would send a message loud and clear not to fuck with Killer of Kings. Boss was systematically bringing down their numbers one by one.