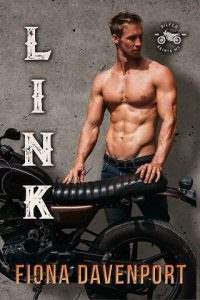 “Link. Prez needs to see you,” Dax, the Silver Saints MC Sergeant at Arms, informed me as he poked his head into my office. I lifted my chin to let him know I’d heard before turning my attention back to my baby girl. Who wasn’t really a baby anymore. Especially now that she had a man.

“I’ve got to run,” I told her, “but I expect regular check-ins from you, Larissa. Now that I know you’ve got a man in your life, none of this a couple of times a week bullshit. Until I get the chance to meet him in person, I want to see your pretty face every day.”

Her boyfriend, Kace, nodded, seeming to easily understand where I was coming from. “You’ve got it.”

I didn’t like the fact that my girl was suddenly serious with a man I’d never met and knew nothing about. However, from the short time we’d spoken on this video call, I’d been impressed. I’d run a full check on him, but something told me I wouldn’t find anything.

Dax made a “hurry up” motion with his hand, and I glared at him.

I winked at my daughter. “Love you, sweetie.”

“I love you, too, Daddy,” Larissa said right before I ended the call.

“What is so fucking important that Mac needs me right this fucking second?” I grumbled as I tucked my phone into the pocket of my jeans. I shut down my computer and pushed my chair back from my desk.

Dax shrugged. “Dunno. They just said to get your ass in there pronto.” He squinted at me, and drawled, “Been embezzling?” Then he chuckled at his own stupid joke.

I rolled my eyes and flipped him the bird before I stalked into the hall. I was treasurer for the Silver Saints MC, and I was damn good at my job. Anything with numbers had always come easily to me, and I’d made the club a shit ton of cash from investments and other opportunities. Seeing as how the club gave me a cut of all the net profits and a salary, I had no need to steal.

When I reached Mac’s office, I wasn’t surprised to see Scout, our VP, lounging on a couch to my left. What I didn’t expect to see was Scout’s old lady, Cat, tucked into his side. I’d assumed this was about club business, but if she was present, it had to be something else.

Mac pointed at the chair in front of his desk. I dropped into the seat and waited silently, which wasn’t unusual for me because I wasn’t known for my conversational skills. Unless it was my brothers and their families, I much preferred numbers to people.

“Got a problem we need your help with,” Mac stated as he rubbed his graying beard. He lifted his chin in the general direction of Cat and Scout, and I turned my attention to them.

Cat sat forward and rested her elbows on her knees while Scout rubbed her back. I would never get used to the way my badass brothers turned into pussy cats for their women. Not that I would say anything and risk a broken face...or possibly a bullet.

“I got a call from an old friend yesterday,” Cat began as she ran a hand through her short brown hair. Scout scowled, and his chest rumbled with a low growl, making Cat roll her eyes. “Just a friend, you caveman,” she muttered, throwing him an equally dark scowl, which only made him grin. “Anyway. Growing up, I lived next door to a family with two kids. Their son was two years older than me, and his sister was a few years younger. We were friends, but after Huntley left for the military, I also stepped in for him and watched out for Harlowe. I kept in touch with them both, though I haven’t heard much from Huntley since he joined the SEALs. But out of the blue yesterday, I got a call from him. He needs a favor.”

I sat back in my chair and folded my arms over my chest. “And this involves me because…?”

Scout narrowed his eyes, warning me to watch how I spoke to Cat. I barely restrained myself from rolling my eyes. Poor whipped asshole.

“Huntley’s SEAL team was involved in a top secret mission recently. He couldn’t give me too many details because of security clearance crap, but his team’s identity was leaked. Apparently, one of the bad guys who should’ve never known who these guys were has been targeting their families.”

“He needs protection for his baby sister,” I surmised.

Cat nodded, but it was Mac who jumped in to talk. “Cat came to me and asked if we’d take in Harlowe until Huntley neutralizes the threat.”

I still didn’t understand what this had to do with me. It wasn’t like they were going to tell me to watch the kid. Babysitting wasn’t in my job description. Not that I wasn’t capable. Just because I spent a lot of time at my desk or repairing bikes, rather than on runs or acting as an enforcer, didn’t mean I wasn’t a lethal motherfucker.