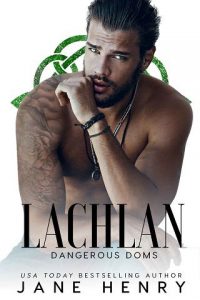 I walk with my head down and my hands shoved into my pockets as a light wind whisks my hair all about me. I shiver, and an odd feeling settles over me. I don’t think it’s apprehension because of the surprise party I know they’re throwing for me but something… different.

I dismiss the thought and toss my head, lift my chin and walk faster. Today, I wanted to come alone, even though my sister Sheena and brother-in-law Nolan offered to walk the short distance from our home to the mansion. I enjoy the walk and they have their hands full with the kids, and Sheena’s expecting again. It took me a while to feel as if I belonged here in Ballyhock, but there’s something about the wild, brisk wind over the sea and the smell of salty air that grounds me.

Maybe it’s because it reminds me I’m part of something bigger than I am.

Today’s my eighteenth birthday, and I’m feeling a bit philosophical.

I know they’re brewing something up at the mansion. I just know it. I’ve heard whispers and giggles among the children and my friends, though no one’s said anything to me. It’s a “surprise.” I’m not sure how I feel about surprises, but I know how I feel about the McCarthys.

Though to the rest of Ballyhock, Ireland, they’re the Irish mob… the Clan that runs damn near everything that happens here… to me, they’re family.

Well. Most of them.

I swallow hard and look over my shoulder, as if somehow, I can manifest the guard that trails behind me into… him. Lachlan. My heart thrums at the mere thought of his name in my mind, and I whisper it to myself just to hear it on my lips.

The only one I really want guarding me. But Lachlan is too high ranking a member of the Clan to be relegated to the mundane task of babysitting Fiona Hurston anymore. A natural-born leader, he’s moved quickly up in rank. I try to think of other things, to prepare for what I know will happen today. It’s been more than a week since I’ve seen him last, and I long to see him again.

But what’s a girl to do, really? Eighteen years old and barely out of school… I’m a child to him. I push the thought out of my mind. I can’t be melancholy today. Today’s my birthday.

I hear strains of music as I draw near, but the McCarthy mansion’s set apart from the rest of Ballyhock behind an iron gate and massive bushes, so I can’t see anything at first. My heartbeat accelerates, though, and I begin to tremble.

Will they make a big to-do? I hope they don’t make a big to-do. I’d have been happy with dinner in their stately dining room, some of the excellent food their staff cooks, and a nice glass of wine now that I’m old enough to legally drink it. I’ve had plenty to drink, but Nolan and Sheena, and definitely Lachlan, don’t need to know that.

When I reach the gate, from the distance, the guard at the gate recognizes me and gives me a huge grin.

“Thank you—” I begin, then I burst into laughter. When I draw closer, I recognize the reddish hair and boyish, twinkling eyes, though he’s more of a man than a boy now. My brother Tiernan sports a beard and Irish ink I haven’t seen before, dressed in the guard’s uniform, tipping his hat to me. I run to him and he gathers me up in his arms for a big hug. Damn, it feels good to give him a hug. I haven’t seen him in ages.

“Tiernan, when did you get home? I thought you were stationed in Boston.” Tiernan graduated from St. Albert’s, the Clan’s finishing school, and has been a full-fledged inducted member of the Clan now for two years. Keenan sends him on international missions, and Tiernan lives for it.

“So I am,” he says. “But Keenan let me come home for this. Wouldn’t miss it for the world.” He kisses my cheek, then lets me go.

“Miss what?” I ask with a curious look.

He only grins. “Now, sis, you’ll not tease it out of me. If you think the McCarthy family will let you turn eighteen without a bit of a celebration, you’ve got yer head up yer arse.”

I laugh out loud as he shrugs out of his makeshift disguise. “I hardly recognized you. Did they change the uniforms?” I haven’t seen this one before, with a crest on the cuff. “Between you and the new uniforms, you took me totally by surprise.”

“No idea, just grabbed it as a decoy,” he says with a grin. “Christ, but things have changed here in such a short time. It’s good to be back.”

He tosses his jacket to the side, and the men who followed me here take their positions by the gate. I won’t need a guard with me once I’m on McCarthy premises. I’ll have the whole Clan.