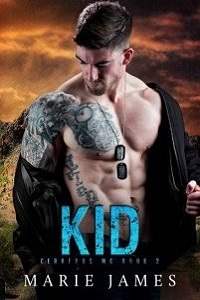 “Do you really have to go?” I watch my best friend, fiancé, and the only man I could ever trust pack his bags.

He gives me a knowing grin. “I’m pretty sure the Army would have a problem if I didn’t report for duty, Khloe.”

I sit on the bed with my head hung low, fingers twisting in my lap. I shake my head slightly trying to stave off the tears I know will fall. I don’t want him to see me crying when he leaves. The last thing he needs along with his first deployment to Iraq, is to worry about me being upset at home.

“Khloe, oh sweetheart. It’s going to be fine,” he says wiping the tears I’ve fought so hard against from my cheek.

“I know,” I lie, even though I have a sinking feeling in my gut that once he walks out of the door, my life will never be the same.

“This tour is only supposed to last like six months. When I get back, you’ll be eighteen.” He tilts my head up, forcing my eyes to meet his. “Concentrate on this.” I feel his fingers touch the engagement ring on my left hand. “I’m getting you out of this damn town, Khloe, if it’s the last thing I do. My promise stands firm. You can count on me.”

“I know, Alec. I’m just going to miss you is all. You’re all I’ve got.” I sniffle, feeling like a child when I need to be acting like the grown woman I’m expected to be in just a few short months.

“And I’m going to miss you, Sweet Girl. I’ll be back before you know it.”

A quick hug, another kiss on the forehead, and I’m watching my life and only chance at freedom walk out the door.

“You promised!” I scream in the empty room.

Sobs wrack my body even now, days after reading the news on the school’s Facebook page. Pretty fucked up that I had to hear about Alec’s death on the damn school site. His parents know I’m here. They know we were planning to get married. Once again in my life, not one damn ounce of care was wasted on me.

It’s been a week and a half since I discovered the news that has ruined my life. Forty-eight hours since we lowered Alejandro, Alec to me, Sanchez into the darkened depths of his final resting place. Even with the sorrow and pain the day had brought, it was a beautiful funeral, complete with an incredible showing of support from other local service men and women. The long motorcycle procession from the funeral home to the graveside was even a nice touch.

I was able to sneak on the bus carrying students from the high school. I got my GED months ago, but the other students were too busy pretending to mourn the loss of a boy, which not less than a year ago they tormented for being different. Anger is said to be the third stage of grief, but sitting on the bus with kids who wanted nothing more than a few hours out of school had me completely bypassing the first two stages altogether.

His family wouldn’t even acknowledge me at the funeral or the graveside. They’ve never been keen on the idea of their one and only son marrying a girl who, by their standards, isn’t even worth the money the great state of New Mexico has invested in her.

Invested. Such a kind, innocuous word for shoved into foster care with a family that couldn’t care less that she’s not stayed a night in their home in months. I’m the only person on the planet that knew Alec in and out. We’ve been friends damn near since my first day in Farmington, inseparable some would say, and I didn’t even warrant a mention in his obituary or during the funeral. His parents refused to let me sit with them, so I ended up with the group of fake kids from the bus. I’ve never felt more alone in my life, which is saying something considering my history.

I have to face all of those same people again today. I read online that there is a benefit fundraiser BBQ type thing going on at one of the parks honoring Alec’s memory; the goal being a monument in the park. He’s by no means the first, nor will he be the last this community loses, but somehow his death landed on the right radar.

Going is the last thing in this world I’d want to do, but I know Alec would want me to be there; if anything to at least see all the fake people. He despised this town as much as I do. He couldn’t wait to get us out of a place riddled with drugs, gangs, and hordes of people with simple minds. It’s the only reason he joined the Army. He didn’t want to be a soldier, but it was a means to an end.