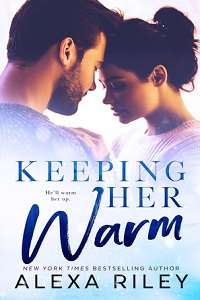 I take a long pull of my coffee before putting it back into the cup holder. The warm liquid helps fight off some of the bitter winter chill. I reach for my radio and clip it on to my belt as I unfold myself from the cruiser, but not before grabbing the tin of cookies I picked up at Maggie’s coffee shop on my way here. I should have gotten a coffee while I was there, too, instead of drinking the shit I made myself this morning. I’m worthless when it comes to doing anything in the kitchen. Probably because my mom was so good at it growing up I never had a need to try. Then when I got in the army they fed us. I’d never had to cook until now and what I do in the kitchen should not be called cooking. Burning, maybe.

I roll my shoulder, trying to get the tightness out of it. I should have stretched it out this morning but I forgot, and I know the tightness will soon turn into a dull throb that will agitate me all day. Shaking it off I head into my mom's apartment. She's been staying in assisted living for years now. She moved in about the time I became a Ranger in the army.

It was always her and me, and I think she misses having someone around. I thought she was a little too young to be living here, but once I got a chance to visit on leave one month ago I could tell this was the place for her.

I stop at the front desk, and Chuck, the man who works it, looks up at me. He hops from his chair when he sees it’s me. Chuck isn’t a big guy and he still carries a lot of his baby face on him, which he tries to hide behind light facial hair. His blond hair and blue eyes only make him look even younger.

“Sheriff,” he says, standing straight. I give him a half-smile to put him at ease. Chuck is always like this, well, at least when I’m around. He has put in a job request at the station a few times.

“Chuck.” I nod at him. “Everything good?” It’s the same thing I always ask when I come here. I want to make sure everything is on the up and up and there aren't any problems.

“Everything is great, sir.” He stalls for a moment and I can tell he wants to say more as he shifts from foot to foot. I raise my eyebrows at him. “It’s nothing really, we just got this odd note.” He digs into a drawer and hands me the crumpled piece of paper. I take it from him and look down at it.

Sorry, I took some bread and peanut butter. One day I hope to repay you.

I study the note for a moment. The penmanship is soft and delicate and makes me think a girl wrote it.

“We wouldn’t have even noticed the bread or peanut butter was missing, to be honest, if the note hadn’t been left,” I hear Chuck say, pulling my attention away from the note.

I slide it into my back pocket. I don’t want to give it back to Chuck.

“I’ll keep my eyes out,” I tell him, not really worried about someone stealing food but more about someone having to. We live in a small town and there aren’t many homeless people roaming around, but there also isn’t a shelter for people to go to. There’s maybe one of the local churches, but I’m not sure how much they are able to help.

I go to leave and head toward my ma’s place.

“I applied for the academy,” Chuck rushes to say, stopping my retreat.

I look back at him. The academy will do him some good. I know he’s eager and has some of the drive needed. The academy will show him more of what he’s getting himself into and if it’s what he really wants to do with his life.

I give a nod, then turn back to head to my ma’s. When I get to her door I give a double knock and reach for the door handle. It’s unlocked like always. I curse under my breath as I enter.

“Don’t even start, Cole,” my ma says before I even clear the doorway, the same fight we always have about the door being unlocked stopped before it can even start. I get that there is a guard on this place and it’s safe, but I still fucking hate when front doors are unlocked.

“It was locked when I was in bed, but I stepped out to grab the paper and didn’t lock it back.” She shrugs one shoulder. “Besides, someone might want to pop in for breakfast.”