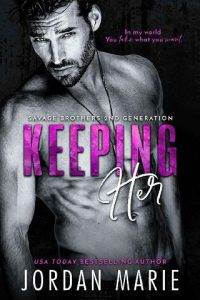 This was a bad idea.

I knew it, but it was like being caught in a fucking tornado on the freeway. You could hide in a fucking ditch, but there wasn’t much you could do to stop the shit-storm headed your way.

“Here they come,” Jonesy says, and you could hear the anticipation in his voice.

He loves this shit, and it definitely shows. Me? I’ve got zero taste for it. I support my club, I do what I have to do to keep our territory ours, and the money coming in. This petty fucking shit? Not my cup of tea. Some young punk had to go and piss off Ford, our Prez.

You can’t do that shit. Ford was a big guy. He probably tipped the scales at three hundred. Sure, he had some meat on his bones, but he also had muscle. That made him formidable enough, but when you added in his short fuse, you had a recipe for disaster. Ford’s temper was scary as fuck. There’s not much in this world I’m afraid of. I don’t even think you could say I was afraid of Ford, but I fucking knew to be cautious around him. He’s an asshole. He’s fair for the most part and he takes care of the men in his club, but he is still an asshole. Then again, most of us are—maybe that’s why we chose this lifestyle.

“Jesus,” I hiss as I get a look at the girl in question.

“She sure as hell is pretty damn close,” I admit, although I can see a few differences.

Lyla is Ford’s daughter. There are few things in this life that Ford will admit to caring about. The club, Demon Chasers MC, and his daughter are the only two. He protects them fiercely. Lyla is his pride and his only child. She’s eighteen, but she might as well be six to Ford. In his eyes, she will never grow up—which is bad fucking news. Because Lyla has grown up. She’s gorgeous and boys have been sniffing around her for a while. There’s only thing that’s stopped them from stepping up to try and get her. Ford.

Certainly, that’s why none of the younger guys in the club have tried. The rest of us view her as either a kid sister or a niece. She’s family. That’s why so many of us are pissed. Lyla has been crying for a fucking month over some little sniveling asshole. My call would have been to hunt down the little dick-weed and teach him a lesson about hurting women. Ford? Well, our Prez might be a fair man and make good decisions ninety-nine percent of the time. It’s that small amount of time when he goes unhinged that gets all of our asses in a sling, and when it comes to his little girl hurting…

He’s determined to bring the little punk to his knees and that begins—at least in his head—with kidnapping the woman he chose over Lyla. Now, normally, I could get more behind this plan of revenge. But then normally the woman in question wasn’t the daughter of Skull, the President of the Devil’s Blaze in Kentucky.

I haven’t had a lot of dealings with the Devil’s Blaze. We’re in Virginia and try to steer clear of the Blaze. We’re not allies and once we take little Gabby here, I think the term mortal enemies will more likely apply.

“We’re sure about this?” I ask Jonesy, hoping like fuck he’ll say no.

“I know you’re against this, Grunt,” he says, frowning, staring at the girl in question.

“Fuck yeah, I am. This is going to get bloody and you know it will. I’m not just talking a little blood either. We’re talking fucking rivers.”

“Yeah,” Jonesy mutters. “There’s no way we’re going to talk Ford out of this shit though. You know that.”

“Let’s watch her for a bit, make contact and tell Ford that we didn’t get the opportunity. If we can delay it a bit---” I shrug, not knowing how to finish it.

“For a man that got the road name Grunt because you hate talking, you’re talking a lot now,” he grumbles.