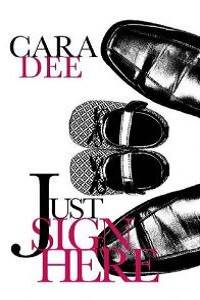 In retrospect, it’s easy to see which event changed my life forever. The day you walked into my work, handsome as all hell—no, seriously, the motherfucking epitome of silver fox, in a three-piece suit, no less—and you said you were looking for me.

But the first time I really felt the shift, like something momentous was happening, something I wouldn’t be able to walk away from unscathed, was when you gave me three little words.

I ignored her and placed her luggage by the elevator, then stalked into the kitchen to grab her sippy cup and snack pack. I was in desperate need of a shower, but a look at the clock told me I’d lost my opportunity around the time I was cleaning oatmeal and applesauce off the floor. After which, Julia had promptly thrown her sticky spoon right in my face.

I gritted my teeth and drew a deep breath. We had a flight to catch; Cathryn would be here any minute, thank God. She could deal with my little terror’s tantrum.

Whoever said that toddlers were adorable had never met mine. Something had happened when she turned two—almost overnight. It felt like she hadn’t stopped screaming since. Four months until she turned three; we’d find out if I lived to see the day.

She let out a wail and started tugging off her clothes in the living room, and I stopped with my luggage in hand and merely stared at her. There was always something wrong. Her dress, her hair, her shoes, how her bed was made, the scent of her shampoo, whatever she ate, and, once, how her teddy bear had looked at her.

Truth be told, I missed her. She’d been there for me, whether she’d wanted to or not, while I grieved the loss of her mothers. She’d been a sweet baby. Quiet. She’d slept through the night from an early age. In short, she’d made my first year of fatherhood very easy. Until her second birthday. My penthouse had become a war zone. Vases had crashed to the ground, same with picture frames, and there wasn’t a single piece of furniture she wouldn’t use her crayons and markers on. If she gave me a hug that lasted more than a second, I considered myself lucky.

“Are you finished?” I asked impatiently.

There she stood, a naked little ball of fury, fire shooting out of her blue eyes, her face red, and her dark hair pointing in every direction.

The sight of her made my heart clench. To think, I was only supposed to be her godfather.

I suppressed a sigh and grabbed the tie I’d left in the hall. “You love flying, darling.”

“Not now!” she screamed.

Thankfully, the elevator dinged, and Cathryn appeared as my daily savior.

“Tell me you have more resumés for me to read through on the plane,” I said. “If I don’t find a good nanny soon, I… It doesn’t matter what I do.”

She smiled in sympathy and tucked a piece of her blond hair behind her ear, and her heels clicked on the floor on her way into the living room. “That bad, huh? Oh my. Good morning, Julia. Let’s get you dressed, shall we?” She turned back to me. “You go wait in the car.”

“Thank you.” I didn’t waste a second. I loaded the luggage into the elevator and headed down.

I blew out a breath and rubbed my temples. Right, my tie. I faced the mirrored wall and tied it.

I had a nanny for Julia, technically. But Cathryn had her own family and couldn’t take care of my daughter past work hours. And to make matters worse, my PA quit last week. She’d told me she was going back to school—in May?—but the gossip at the office said otherwise. She’d found me too bossy.

I’d been her boss, goddammit!

If she only knew how much I held back these days. Once upon a time, control had been everything to me. I still craved it every damn day, but I wasn’t likely to get a taste of it again anytime soon.

I nodded in greeting to Paul, who opened the door for me.

“Thank you, Paul.” I aimed straight for Mathis as he popped the trunk. He was responsible for all my transportation, including air travel, and I was happy to have him with me. He was the only one who’d been with me for longer than five years. More than that, he was the only one who didn’t have a higher position in his sights. He was perhaps a year or two younger than me, and he’d reached his goals. He got to travel as a work perk, which gave him the opportunity to see the world and catch up with friends from his past in the Army. “Good morning, Mathis.”