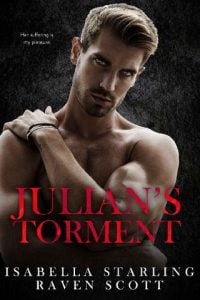 After Aurora's return to the Bernardi mansion, things calm down for a while, and we're all grateful for it.

Father seems pleased two of his sons are now married and the house is lulled into a false sense of security. But I should have known it wasn't going to last long. And the next bombshell that drops on the Bernardi famiglia concerns me, embroiling me into a scandal Father will kill to prevent from happening.

I'm fucking hungover from being out most of the previous night. It ended with me and three girls in my bed, and my guard escorted them off the premises before Father could see them. I'm sure he wouldn't take lightly to more of my womanizing – he's already reprimanded me for it several times.

That day, Father calls me into his office. I saunter in confidently and take a seat on the opposite side of Father's desk, reaching for one of his cigars displayed on the polished wood.

"Are you even going to ask if you can have one?" Father raises his brows at me.

I smirk in response, not giving him an answer. Instead, I clip the end and ignore Father's watchful gaze as I start to smoke it. I can tell he doesn't approve, but my rebellious nature pushes me to keep going, maybe just to get a rise out of him.

"We need to talk, Julian." Father heaves a sigh and waves his hand in front of his face to get rid of the smoke.

"You." Father's piercing gaze would make anyone nervous, but not me. I know I can sweet-talk him out of anything that's coming. Even though Father would never admit it, I know I'm his favorite of all his sons. He has a soft spot for me, and I fully intend on milking the fact to the best of my abilities.

"You're becoming a problem," Father grunts.

"Let's see." He taps his finger against his chin. "You've fucked half the maids in the house. You keep getting into fights and getting yourself embroiled in scandals. I'm this close to punishing you accordingly."

I smirk, knowing full well this is just talk. It's not like Father would do anything that wouldn't benefit me. He cares about me too much – he always saw me as his little pet project, and that's not about to change now, no matter the amount of merda I get myself into.

"You're not taking this seriously at all," Father says next. "What do I have to do to earn some respect from you, Julian?"

"You have my respect," I reply firmly, and it's true. I've always admired Father. But that doesn't mean I'm going to change my ways just to suit his agenda.

"You have a funny way of showing it." Father glares with contempt at the cigar in my hand. Finally, I put it out and give him a look as if to say, are you happy now? He nods and leans back in his chair, another sigh ripping itself from his lips. He looks weary and tired. "Julian, I don't want to punish you. But you're not giving me much of a choice."

I don't know what my punishment would entail, but I'm sure I wouldn't like it. It would also be the first time Father would discipline me. I know he's been lenient with me, especially compared to the rest of my brothers. But I can't help arguing further, digging myself into an even deeper hole.

"Father, I won't let you down. Give me another chance."

"You're on very fucking thin ice," Father grunts. "If you disappoint me again, I will have no other choice but send you to The University."

"The University?" I furrow my brows, unsure of what he means. "That’s nothing but a myth."

"It’s not myth, son. It’s a special training place for mafia heirs," Father says, piercing me with his gaze. "It's where mafia children get sent to be whipped into shape."

Father nods. "It's a three-year program."

"But I already finished high school."

"Not that it's done you any good," Father barks. "You're terribly behaved, you fuck anything that moves, and you don't have any family values."

I want to be offended by his words, but he's right.

My heart has withered over the years. A lifetime of disappointments and unfairness will do that to you, I suppose. For most of my life, Bruno Bernardi has been the one bright spot in my life. The man who saved me from almost certain death now sits before me, deeply disappointed in my actions.

A part of me wants to apologize, but it's outweighed by the fiercely independent side of me that wants to fight anyone who goes up against me. I remain silent, my lips firmly pressed together as I study Father with my gaze.

"Aren't you going to say something?" Father grunts. "You could at least defend yourself."