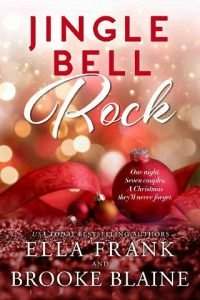 THE SOUND OF “Rockin’ Around the Christmas Tree” playing somewhere in the apartment greeted me as I stepped out of the shower, and I chuckled. For someone who claimed he didn’t care for holiday music, Solo sure had been listening to Christmas songs on the radio nonstop for two days.

I wrapped a towel around my waist and headed into the living room, and the sight that met my eyes made me grin. Solo sat on the couch with his phone in hand and was listening intently to the radio propped up beside him.

“Starting to feel the holiday spirit, are we? Where did—”

“Shh.” Solo held up a finger, never taking his eyes off his phone. As the song faded, an announcer came on, and I could’ve sworn Solo’s ears perked up.

“You’re listening to WZLA’s holiday channel, and coming up, we’ve got a special surprise guest in the studio. The one and only Ace Locke is here to give away a pair of VIP tickets to the sold-out Christmas Jingle Ball charity event, and trust me, you’re not going to want to miss this. Stay tuned.”

As a commercial took over the airwaves, Solo bumped the volume down a notch and finally looked up at me, his eyes sparkling with excitement. “Did you hear that? Ace fucking Locke is giving away the tickets.”

“Is this why you’ve become a man obsessed lately?”

“I’m going to win these tickets. It’ll be the perfect way for us to get out of spending the holidays with your folks—no offense.” He motioned for me to join him on the couch, and before my ass hit the leather, he kept going. “We can drive up to L.A., stay in a nice hotel, relax, and then—get this—go see Ace Locke, Trent Knox, and…Fallen Angel.”

“Yep. They’ll all be there. That’s why I have to win these tickets.”

I opened my mouth to speak, but couldn’t get anything out, because oh my God… Fallen Angel?

Like he could read my thoughts, Solo smirked and nodded. “And not only would we watch the show, these are VIP tickets, meaning—”

“We’d meet them? Holy shit, would we get to meet them?” My heart began to race at the possibility, and I reached across Solo to turn the volume on the radio back up. “You better win those damn tickets.”

Solo laughed. “What do you think I’ve been trying to do?”

“Have I mentioned how much I love you?”

“Just the fact that you’re trying to get tickets to see my favorite bands…” I shook my head. “You’re a romantic under all that hotshot bravado, but don’t worry. I won’t tell anyone.”

Solo shot me his secret heartbreaker smile, the one that simultaneously made me weak in the knees and had me shifting on the couch. Before I could even think about making a move, the deejay was back and Solo sat up, his focus intense once again.

“It’s the moment you’ve all been waiting for, and I can’t believe it myself, but we’ve got Hollywood’s hottest action star Ace Locke live in the studio with us. Ace, thank you for being here.”

“Great to be here,” came a deep voice, instantly recognizable to the millions of people who’d watched him on the big screen for years.

“First off, if I don’t tell you my wife, Cassie, is your biggest fan then she may not let me come home tonight.”

Ace chuckled, low and seductive. “Well, we can’t have you sleeping in the street. Is she here?”

“Oh, I made sure she stayed behind that glass over there. For everyone listening, yes, I made my wife stay in another room, because if you saw the way she’s looking at him right now, you’d be worried too that she’d jump him given the chance.” A few seconds later, the deejay groaned. “And now Ace has gone over to give her a hug… Oh, great. I’m pretty sure she just died happy. I’m now a widower, guys. Awesome.”

“Can I just say, your wife smells amazing,” Ace said when he got back on.

“And how is Dylan these days? I swear I pass him on ten different billboards on my way to work.”

“Lucky you,” Ace said, a smile in his voice. “He’s great, busy as ever. As a matter of fact, he’s at the Lyons arena now doing a shoot while they finish setting up.”

“Which is a great lead into why you’re here. Tell us about this big event happening tomorrow.”

“Well, I think we can all agree it’s been one hell of a year, am I right?”

I found myself nodding along with Solo, who still had that intense look of concentration on his face that made me bite back a smile. He wanted this bad, and now that I knew what was up for grabs, so did I. With me so often traveling with the Blue Angels, and Solo working on base here at NAFTA, a few days together in L.A. sounded like heaven.