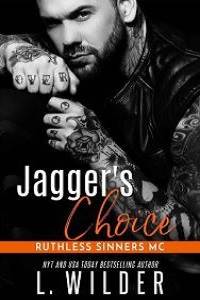 There was nothing better than tossing back a few drinks and shooting the shit with the brothers. I hadn’t been a member of the Ruthless Sinners long, but it already felt like I’d known them all for a lifetime. They were my family. They had my back, and I had theirs, but there was more to it than that. When we were together, we could sit back and cut loose—just like we were tonight.

Widow and I had just ordered another round of shots when I heard Country say, “This girl was smoking hot with five-gallon titties. You should’ve seen her. I mean, smoking hot, but as soon as things started to heat up, she went all cold on me ... Ice cold.”

“Sounds like she came to her fucking senses,” Rafe teased.

“Nah, she’s a smart girl. She knew she’d found the golden ticket with me. She just didn’t wanna come off too easy... She wanted me to think she was a good girl who didn’t give it up on the first date. That’s when I gave her a little push and told her, ‘Baby, just remember, Jesus loves you and all that, but Satan does that thing with his tongue. Let’s do a little sinning, and we’ll pray for forgiveness tomorrow.’”

Clearly amused with himself, Country started chuckling, but his smile quickly faded when Menace added, “And that, brother, is why you don’t have yourself a woman.”

“Yeah, keep telling yourself that,” Menace snickered, then turned his attention to me. “Surprised to see you here tonight. Figured you’d be off somewhere with Sadie.”

“Oh? Trouble in paradise or is she just busy tonight?”

I knew he was fucking with me, so I shook my head and grumbled, “Can’t a man go out and have a few beers with his brothers without everyone giving him a hard time?”

“Oh yeah. Definitely trouble in paradise.” Menace motioned his hand over to our bartender, Lisa. “He’s gonna need another round. Maybe two.”

Lisa grabbed the bottle of tequila and a couple of shot glasses, then placed them down on the bar. “Here you go, boys. Let me know if you need anything else.”

When she turned and walked away, Menace grabbed the tequila and started pouring us both a shot. “Here ya go, brother. Now, you can drown your sorrows.”

“Got no need to drown my fucking sorrows, asshole. Nothing’s wrong.”

“Whatever you say, boss.” He patted me on the shoulder. “Give her some of the good stuff when you get home, and it’ll be all right.”

“Are you gonna keep this up all night?”

I tossed back the shot and was about to do another when my burner started ringing. I grabbed it out of my pocket and groaned when I saw it was my sister. She only reached out to me when she needed something. I had no doubt tonight wouldn’t be any different. I was tempted to blow her off and spend the rest of my night hanging peacefully with my brothers, but I answered her call.

That choice would haunt me for years to come.

“Good morning, Mr. Hughes. My name is Claire Cunningham. Along with the rest of the Parole Commission, I have brought you in today to discuss the possibility of your parole. It is our job to determine whether or not you should be released from prison to parole supervision for the remainder of your sentence.”

I didn’t see any point in giving a response. I could tell by the way my so-called “board of my peers” were looking at me that they’d already cast down their judgments. The second they eyed my long hair, the ink marking my skin, and that fucking orange jumpsuit, they saw nothing but a criminal. All I could do was sit there and try my best not to crawl out of my own fucking skin as they asked their tedious questions. Ms. Cunningham studied me for a moment, then asked, “Why don’t you tell us all why you have been incarcerated?”

“I’m sure you all are fully aware of why I’ve been locked up.”

“Yes, we have your records, but we would like to hear it from you, Mr. Hughes.”

“I killed a man,” I answered bluntly.

“Can you be a little more specific?” Cunningham pushed. “It’s important for us to know all the details concerning what transpired between you and Mr. Ortega.”

“He was my sister’s boyfriend. Apparently, he had a thing for knocking chicks around ’cause he did a real number on my sister.”

I thought back to that night, the way she looked when she opened the door—all broken and battered, and it brought bile to the back of my throat.

My sister had made her fair share of mistakes, but she didn’t deserve that shit.

I swallowed hard, pushing back those feelings of rage, and said, “She called me to come to her place. Told me that she and Ortega had gotten into it. When I got there and he discovered she’d called me, he started laying into her again. That’s when I intervened. We fought, and Ortega ended up falling backward. His head hit the corner of the coffee table, and that was it. He cracked his skull or something. Can’t say for sure. Just know he died soon after.”