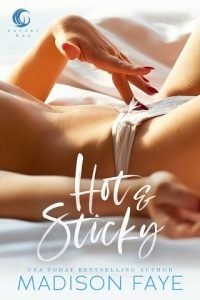 “So are yours frosted too?”

I blink slowly, trying to decipher what the leering, creepy guy in the sunhat standing in front of me is saying.

He grins lecherously and elbows his equally skuzzy looking pal. Both are sporting surf-brand clothes, though both also look like they might have heart attacks if they were to actually attempt to surf.

“I was just curious if your buns were frosted, too.”

My brow wrinkles. “Well, sir, you can get them plain if you like, though it’s the same price. You can also add extra glaze for fifty cent—”

Instantly, my smile fades. Across the counter, the two dipshits start to chuckle at my reddening face and total lack of comeback. I have no idea how I managed to not see that one coming, especially since it’s hardly the first time a creep has decided to say it to me while working here. Actually, in the twenty-year history of the “Buns Out” cinnamon bun stand on the pier, you’d probably have a million bucks if you took a quarter every time some poor girl got that gem of a line working here.

My lips purse. I wish I was sassy enough to give them both a piece of my mind—something witty and blistering. Or I wish I was bold enough to slap them both across the face or throw a soda over their heads. But instead, I just stand there swallowing thickly, trying to come up with something while my cheeks burn.

“Oh relax, sweet cheeks, it was a fuckin’ joke,” the buddy says, rolling his eyes.

I mumble something incoherent and turn to grab their stupid cinnamon buns. I’m tired, my feet hurt, my arms are sticky and tacky with sugar frosting up to the fucking elbows, and it’s so fucking hot. I mean, melting hot—hot like I feel like I’m serving fucking buns from inside the oven.

My hair is stuck like glue to the sides of my face, and I can feel the sweat dripping down the small of my back and soaking through the white tank-top with the “Buns Out” logo on the front. The whole uniform is disgusting—it feels like something I should be wearing as a cocktail waitress at a strip club, or maybe being up on the stage itself at said strip club. The too-small, plunged-neck white tank, the frayed, ridiculously high-cut daisy dukes, and the—wait for it—knee-high stripped socks. I literally look like I belong in a porn movie set in a cinnamon bun shop.

My uncle Matt has owned Buns Out since it started, and he’s the creep behind the uniform choice, or why no guy, ever in the history of Buns Out has ever managed to land a job here. How odd. Or any girl over the age of twenty-two. Or any girl who didn’t physically fit into his stripper outfits. Or any girl who wasn’t blonde, now that I think about it. The nice version, from my mother, is that her adoptive brother, my Uncle Matt, is a “bit of a lech sometimes.”

The unsanitized version is that he’s a disgusting creep who mentally undresses every single woman he sees, and as much as it wants to make me barf, I’m including myself in that metric.

My attention snaps to the next woman in line, barking at me. She’s sweating almost as much as I am in the sweltering bun shack. It’s hot a hell outside in the blazing southern California summer heat. But the air conditioner inside is shot to hell, and my uncle’s been promising to get a repair guy in for about four days of sweaty, sticky hell.

“By not staring into space and helping me,” she mutters. “A dozen, extra extra glaze.”

I smile painfully again. “Yep! Coming right up.” I turn to start packing up her order.

“I said extra because last time, you cheaped out on the extra glaze!”

I hate my job. I kind of hate my life right now, too. Who the fuck is buying hot, sticky cinnamon buns to eat, outside, in ninety-eight-degree summer heat with an eighty percent humidity index? I mean honestly.

I give the lady her order, and I cave when she barks at me for daring to charge her for the extra glaze. I could make it a principle thing, but I honestly don’t care. I’m exhausted, I’m melting, and there’s zero respite in sight.

See, the fun part of all of this is, when I finally manage to leave tonight, after my fourth double shift in a blazing hot cinnamon bun stand with no AC, the nightmare doesn’t end. After graduation last spring, my parents sold our house and moved up to Vancouver for my dad’s new job. I stayed the summer since I’m going to be going to UCSD in the fall, and of course, I found myself working at Uncle Matt’s shop. But what’s even worse? When I go home tonight, it’s to Matt’s house. I go from working at creepy, lecherous Uncle Matt’s gross cinnamon bun stand, to sleeping in creepy, lecherous Uncle Matt’s house, where I lock the bedroom door and push a dresser in front of it every night.